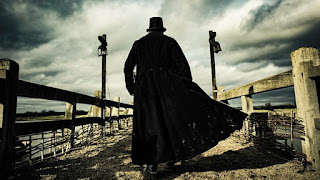 Following its recent success both live and on iPlayer, there will be a second series for Taboo...

BBC One and FX announced today that they will team up with producers Ridley Scott’s Scott Free London and Tom Hardy’s Hardy Son & Baker for a second series of Taboo.

Set in 1814, series one follows James Keziah Delaney (Tom Hardy), a man who has been to the ends of the earth and comes back irrevocably changed. Believed to be long dead, he returns home to London from Africa to inherit what is left of his father's shipping empire and rebuild a life for himself. But his father's legacy is a poisoned chalice, and with enemies lurking in every dark corner, James must navigate increasingly complex territories to avoid his own death sentence. Encircled by conspiracy, murder and betrayal, a dark family mystery unfolds in a combustible tale of love and treachery.

Created by Steven Knight with Tom Hardy and Chips Hardy, Taboo is one of the most successful dramas ever on BBC iPlayer and has been a huge hit with younger audiences. It is still available as a box-set on iPlayer and viewing to the series continues to grow. The series launched in a new Saturday night slot on BBC One and through word of mouth and social buzz, drove younger adults to catch up later with its dark, complex and immersive storytelling, led by the mesmerising Tom Hardy.

Charlotte Moore, Director of BBC Content, said “Taboo has been a phenomenal success and proves overnight ratings are not the only measure of success, as the series even now continues to grow beyond live viewing. Launching in a new Saturday night slot on BBC One provided us with an opportunity to take risks and showcase distinctive drama, and the growing talkability of Taboo has engaged younger audiences, seeing record numbers coming to BBC iPlayer, with the availability of the box set maximising audiences even further. A second series can't come soon enough. My thanks to the incredible creative team behind Taboo, from creators Steven Knight, Tom and Chips Hardy, and Ridley Scott and Tom Hardy’s unforgettable performance. As well as our partners FX."

Piers Wenger, Controller BBC Drama, added "Taboo is the perfect storm of on-screen and behind-the-camera talent, and there was never any doubting the capacity of Tom and Steve to create an unmissable cinematic drama event for Saturday nights. It's been a thrill to see the audience for Taboo build over time and in such large numbers. In series two, Tom and Steve and the show's brilliant producers are promising something daring, different but equally unmissable, and I'm delighted that the BBC is partnering with FX once again to roll Taboo out to audiences across the world."

The makers of the series are equally excited. Steven Knight, creator and executive producer, says: “I’m thrilled that a work which pushes boundaries has been so well received and found such a large and enthusiastic audience in the US and Britain. We have tried to take an impressionistic, rather than figurative, approach to a narrative which we hope more accurately portrays the spirit of an extraordinary time in history. James Delaney will continue to explore many realities as he takes his band of misfits to a new world, thanks to FX and the BBC, partners who could not be more suited to collaborating in ground breaking work.”

The new 8 episode series has been commissioned by Charlotte Moore, Director of BBC Content and Piers Wenger, Controller of BBC Drama. It will be produced by Ridley Scott’s Scott Free London and Tom Hardy’s Hardy Son & Baker for BBC One and FX with Sonar Entertainment distributing worldwide outside the UK. Executive Producers are Ridley Scott and Kate Crowe for Scott Free, Tom Hardy and Dean Baker for Hardy Son & Baker, and Steven Knight.