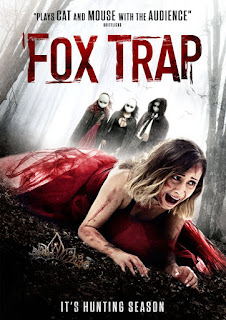 The film's tagline says It's Hunting Season but did Ren Zelen catch something good as she watched Fox Trap...

A nasty prom prank by a group of schoolmates goes horribly wrong, leaving a young girl disabled. Eight years later, the only participant who went to jail is released (the others having all run from the scene). Mysteriously, the whole group receive invitations (although inexplicably, ‘plus ones’ are allowed) to a remote manor house in the countryside for a class reunion, where a masked maniac doles out the rough justice that is long overdue (well, not justice for all, as some of the ‘plus ones’ were uninvolved, but hey, collateral damage or… whatever).

Does this sound familiar? If you are a fan of horror movies, I would imagine it does. This tried and tested horror formula is the scenario presented by Jamie Weston (shorts: Sinners; Tales from the Apocalypse: Silent Dawn) in his movie Fox Trap - a British slasher film from a screenplay by producer Scott Jeffrey (The House on Elm Lake; Unhinged).

When your directorial feature debut is touted as being a homage to past horror slasher greats, it needs to have something to say about the genre. So, the question is, can Mr. Weston do anything imaginative with this format? The answer is - not really.

The atmosphere from the outset is one of antagonism, but as none of the characters are sympathetic, likeable or even distinctive, it makes it difficult to believe that they were ever a close-knit group of friends, or care when the bloody retribution begins to take place.

A kind of ‘Truth or Dare’ game is introduced as a blatantly contrived device by which the characters at the ill-fated reunion are able to bicker about whose fault the erstwhile tragedy was, and throw the blame around. Too much time is spent setting up the rather two-dimensional characters and their disputes, watering down any shock value when their in-fighting is interrupted by an occasional killing.

Weston tries to add some suspense by latterly casting doubts as to who the murderer behind the inevitable mask and cloak might be, but ultimately, there isn’t much in the way of options, so the tension doesn’t really bite.

So then the horror must lie with the modus operandi of the murderer? Again, it’s all pretty much been done to death (pardon the pun) since Halloween and Scream, and this film doesn’t even have the excuse of being ironic. Even the camera work comprises of mostly similar medium shots and close ups.

So, is the horror to be found in imaginative methods of dispatching the victims a la Saw? Once again, not really – there is one protracted hammer attack which would have likely dispatched the victim rather quickly, so it only serves to stretch one’s credibility.

Eventually some plot twists and reveals are introduced, but it’s too little, too late. There are few tense set pieces or chases to make an impact within a flimsy narrative. Revenge is only ever as interesting as the personalities involved and the unusual circumstances surrounding them.

Fox Trap is a run of the mill-masked-stalker-in-the-house film with only a small amount of suspense and no truly memorable horror moments. There is nothing to distinguish it from the myriad of other horror movies being released, or as a loving salute to slashers past.