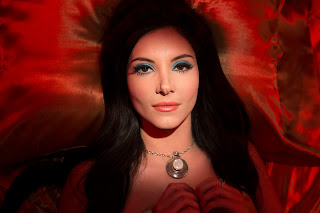 With retro looks and modern message, does The Love Witch cast a spell over Ren Zelen (slight spoilers)...

The Love Witch is Anna Biller’s second feature film and, as in her debut VIVA, it references the style of ’60s and ’70s cinema. Produced, written, directed and edited by Biller, she also acts as production designer and set decorator (down to hand-crafting props), supervises the costumes (using dress patterns from the era) and creates the soundtrack (mixing her own compositions with selections from vintage Giallo soundtracks). Biller immerses us in a world inspired by 1970s sexploitations, TV movies, Italian and American horror films and hippie-Wiccan sensibilities.

Cinematographer M. David Mullen (Jennifer’s Body) supports her vision, shooting on 35mm film and utilizing saturated colour to recreate the look of the era. The actors deliver their lines in a stilted fashion and the acting is purposefully wooden. The males leer and swagger with a masculine sense of entitlement and have chiselled features, thick hair and straight jawlines. The females are divided into soft, sexy femme fatales or dowdy, repressed, homely types.

However, appearances are deceptive, as The Love Witch is not actually set in the past but in the present, which makes the action and dialogue all the more ironic.

The opening sequence follows Elaine (Samantha Robinson) as she drives along the cliff road of the American West Coast, musing on what she sees as her tragic past, indicating that she is recovering from a failed marriage, although her flashbacks seem to tell a more sinister story.

Elaine is a perfectly made-up, raven-haired beauty, whose ever-present black eyeliner and vivid eye shadow are character trademarks. She is moving to a small West Coast town to begin anew her near pathological search for her ‘true love’. The camera lingers on Elaine and her perfect colour co-ordination – her matching dress, lipstick, car – the first indication of the objectification of the female.

Elaine arrives at her new home and befriends working-wife Trish (Laura Waddell). They go out for lunch together, over which Elaine outlines her theory of seduction – a woman must make herself into a man’s ‘ultimate fantasy female’. Trish is surprised, and counters by underlining that it is any woman’s reasonable hope that a man will ‘love her for herself’.

However, in Elaine’s world-view, men never love women for themselves, so she uses potions to dose them, then strips and flaunts her body in her effort to score a seduction. It’s an effective technique and it works for her, but once the conquest is over, all her men seem to disappoint and end up dead.

Elaine complains bitterly about how badly she has been treated by men - how they deny her their love as a punishment and only want to use her body. She insists that witchcraft is the belief-system that has empowered her to take what she wants from men, but is this just another illusion foisted upon her by the male leader of the coven, who encourages young women to get naked and indulge in sexual rituals, telling them that this is their road to ‘empowerment’? (One wonders if every starlet and diva hasn’t been told the same story). 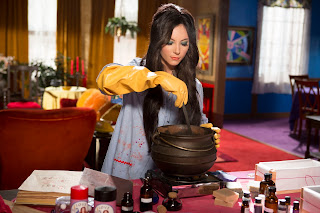 Holding to her beliefs, she mixes her ‘sex-magic-cocktail’ for Wayne (Jeffrey Vincent Parise) a university lecturer and free-love exponent and takes him to bed. After sex he complains how he cannot commit to a woman because the pretty ones are dumb and the smart ones are too plain. He becomes maudlin, whining and emotional. Elaine is repulsed by his behaviour and is subsequently relieved to find that he suddenly expires.

After seducing Richard (Robert Seeley), the apparently devoted husband of her friend, she grows weary of his attachment, although flattered by the fact that he commits suicide in despair after she breaks off the relationship.

Elaine has a dogged belief in specific gender roles: She says she is willing to be dutiful housewife by day and a whore by night, but she expects her man to be the perfect Ken to her Barbie. When they don’t live up to her ideal of what a male should be, she quickly casts them aside, although they appear to have given her what she claims to crave – their emotional side – their ‘love’.

Men may satisfy Elaine’s physical needs, the film suggests, but do they really care for her and does she even like them? They may consider themselves Casanovas or bedroom Lotharios but they all ultimately disappoint her and she doesn’t see that she is in fact behaving as shallowly as the very men she purports to despise. Elaine is as narcissistic in her treatment of other women and in her relentless self-interest as the men she believes she is pleasing.

The fact that Elaine’s ‘love-sex-magic’ turns out to be lethal may be mere co-incidence but her predatory dating habits get her into deep trouble, both with the townsfolk and with the police.

Sometimes Biller’s devotion in recreating a certain kind of film is in danger of swamping the points the movie seems to want to make. Some scenes linger too long on the visual extravaganza. However, The Love Witch is trying to be more than just a loving pastiche – it attempts a satire upon society, the media and its inherent genre and gender tropes. The film exposes the confusions, contradictions and ambiguities regarding expectations versus the reality between the sexes.

When confronted by local cop Griff (Gian Keys) who refuses to play the game and denies her seductions – Elaine apparently becomes so deranged by the conflicting information she has absorbed about gender roles and idealized notions of love and sex, her only response is - if he won’t give her his ‘heart’, then she must simply take it from him.

A fear of female sexuality has long been a staple of horror movies - The Love Witch offers no easy answers but is relentless in the way it acknowledges the unease which comes with questions about our culture’s way of dealing with the female sexuality. Biller indicates that the male gaze creates a dangerous double standard which can result in neurosis and tragedy. It conflates two eras to ask the question - how much has really changed, and with gender roles blurring, have we lost sight of what we all actually need?