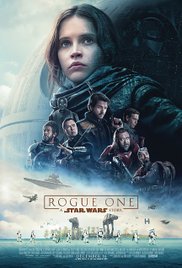 With the DVD coming out in less than a month it's time to catch up with the force that is Kraig Taylor-Bryant to get his thoughts on Rogue One: A Star Wars Story (major spoilers from the start)...

What did I think of Rogue One?

Now that's a question that I've been pondering a while. Bear in mind though that lack of time is the main reason that I haven't written anything about it yet, don't mistake me for some philosophical genius or something. When I watched Rogue One in the cinema, I was shocked by what I was watching for a start. This was mainly because, five minutes into the film, one rebel killed another just so that some Imperials didn't get the chance to interrogate him. I've got to be honest, I really wasn't prepared for that. I was literally thinking about it for ten minutes as the story continued (whilst keeping my full attention on the film of course). Don't get me wrong, most dark elements of the film were incredible but there's something about seeing a rebel shoot his fellow man that doesn't sit well with me enjoying a Star Wars film.

The damage that could be inflicted by the Death Star is also shown early on in the film through the destruction of Jedha, the desert planet/moon shown in the trailer (not the one with water and a forest). This destruction was on a smaller scale which was just brilliant as it allowed the director to show the devastation of parts of the planet from the view of the sky rather than further out in space, meaning you buy more into the idea of there being lives lost.

Because this was a prequel, towards the end of the film I was beginning to ask myself, 'Are the rebels going to actually die or is just coincidence that the characters don't show up in A New Hope?' Of course, I know that A New Hope was obviously the first Star Wars film that was made, I just wanted to know how Rogue One would fit together with the existing timeline. For it to make sense to me I would have assumed that they all died sometime afterwards so, as the film reached the final climax, I waited for them to leave the Alliance or go on secret missions.

To quote Obi-wan 'I was wrong'.

In the final half hour (ish) there was death everywhere! It was brilliant! Not trying to seem like a psychopath or anything but the ways they died were so “rebellious” and the Alliance didn't seem like the heroic merry band of troops that the original trilogy showed them to be. This is what makes the film so good. They were just rebels that didn’t have the experience or numbers to survive the Empire. Let’s be honest, there are only two things in the originals that made the Empire look intimidating, that's Darth Vader and John Williams' epic soundtracks. Pretty much nothing else said otherwise. Maybe a few unknown rebels blew up but no one thought too much about them because the film didn't focus on them as individual characters. In Rogue One we see heroes fall, which is exactly what the franchise needed to show the power of the Empire.

I need to talk more about Vader as he, for me, was the masterpiece in the Rogue One gallery. That dark moment at the end where the rebels are terrified of him really shows just how much the galaxy feared him. This doesn’t come across well in the original trilogy as the only times you really see him is in the presence of rebels or Luke Skywalker so a lot of people that didn't read the books or anything like that would have no idea of what the people of the Star Wars galaxy really thought of him. The best part was that it seemed like he enjoyed the fear he caused, or he may just be taking his anger of his wife's death out on rebels, either way it was pretty damn awesome and showed a side of Vader that we really didn't get to see in the originals.

Now onto the negatives, and this is not a section that I particularly like writing about any film, especially a Star Wars one, but there is something I want to address. Personally I think that Rogue One is the modern day Empire Strikes Back but darker and (don't torture me for saying this) better in some ways however, for me, the trailer was a major let down and did the film a great dis-service.

Of course there are some (like Steve Taylor-Bryant) that do not watch trailers for Star Wars, but I like to have some idea of the film that I am going to see even if it does spoil it slightly. To be honest though, the Rogue One trailer was just terrible. When I wrote my review on it, before the film came out, I remember saying that I thought there would be more of a back-story between characters which there wasn't, and that I don't mind, as the film was amazing anyway. But there were so many scenes that were in the trailer that were not shown in the film. The awesome scene where Jyn Erso confronts a tie fighter in person? Completely cut out. I don't know if this was her original death scene and, if it was, I can understand why they cut it out. However, if this was some moment where she fights the Tie Fighter or thinks she's going to die but is saved, this would lure the audience into an amazing false sense of security and leave them unprepared for her actual death later on. Also the scene from the trailer where K-2SO says to Jyn that Cassian told him she is an ally and therefore 'he would not kill her' would have shown how casual he is about death as well as making the film slightly comical and, when I was watching the film, I was actually waiting for that scene to come up but no. Cut out. I do understand though if they thought that it wouldn't fit with such a dark film but I still think it would have been amazing to see it in the film. A final example would be the scene in the trailer where Jynn is seen charging along the shore in front of an Imperial Walker. I don’t know why they needed to cut that out, as I don't think anyone would NOT want to see an army of rebels charging towards an Imperial Walker! However, it would also have increased the risk for the characters' safety so it would feel too coincidental that she keeps surviving and get a bit ridiculous with the Tie Fighter scene and this scene so I suppose the cut could have made sense.

Nevertheless, imagine a scenario where you decided that you do not want to watch the new Star Wars film because you saw the trailer and there was nothing in it that seemed appealing to you. Obviously if you are a hardcore Star Wars fan like me then you would have gone to see it regardless but some people do base the decision to watch a film purely on the trailer and how it presents the film. If you did that with this film then you may not watch Rogue One at all and, believe me, that would be a big mistake.