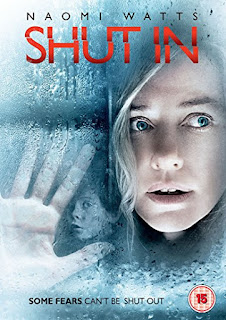 Ren Zelen looks out for Shut In, out on DVD and Blu-ray on April 10th...

Naomi Watts stars in Shut In, a workman-like thriller which is the debut feature from TV director Farren Blackburn and screenwriter Christina Hodson.

Watts plays Mary Portman, who lives and works as a child psychologist in a remote corner of rural Maine. As the story opens, she is waving goodbye to her 18-year-old stepson Stephen (Charlie Heaton of Stranger Things), as her husband Richard (Peter Outerbridge) drives him to a new school.

Unfortunately, father and son have a heated argument in the car which results in a horrible crash which leaves her husband dead and stepson Stephen in a catatonic state.

Mary elects to care for the paralyzed Stephen at home by herself, and, while she clearly cares deeply for him, the pressure of being a carer and her job as a psychologist is beginning to take its toll. The only outlet for her frustrations are Skype sessions with her own psychiatrist and counsellor Dr. Wilson (Oliver Platt).

One night, one of her patients that she has a particular affinity for, a 9-year-old deaf boy named Tom (Jacob Tremblay from Room), turns up on the doorstep of her remote house. Before she can discover how he got there, or fully warn the authorities of his whereabouts, he again disappears into the freezing winter night.

The police are informed and a search begins, but days later Tom is still not discovered and there are worries about his survival in the freezing Maine temperatures, with a storm now on its way. Mary is crushed with guilt over her powerlessness regarding Tom’s disappearance until strange noises and odd occurrences begin happening at night in her house, and Mary begins to see seemingly hallucinatory visions.

Mary is convinced that the strange events of the night are not just in her head, but of course, her psychiatrist Dr. Wilson suggests that she is suffering sleepwalking visions during her bouts of insomnia instigated by stress after the trauma of what happened to her husband Richard, her stepson Stephen and the recent disappearance of Tom.

In an effort to relax, she invites Doug (David Cubitt) a recently divorced father to her house for dinner, during which she confesses that she is considering sending Stephen to a care home, as the strain of his constant supervision is becoming too much.

As the storm bears down, she refuses Doug’s invitation that they join him at a hotel to ride it out, as hey, absolutely nothing strange or bizarre has been happening in the remote house where she lives and she and Stephen will be fine during the storm, even if they get cut off from the outside world, right? 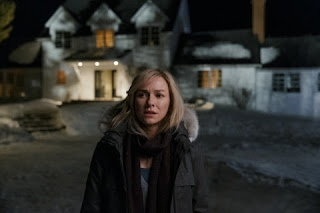 Inevitably in these kinds of thrillers, Mary lives in a large, creaky, rambling house, full of closets, cupboards, compartments and corners potentially harbouring endless opportunities for jump scares. She is also plagued with a dodgy electricity system which tends to fail during winter storms, and then of course, she is forced to wander around in the darkness.

It all goes pretty much by the numbers and the script lets itself down with rather stilted dialogue and glaringly evident plot devices. However, when things finally kick off, the mundane plot is enlivened by the efforts of the very capable Naomi Watts offering her terrified and horror-stricken act, familiar from films like (the American remake of) The Ring, and an effective turn from newcomer Charlie Heaton.

Shut In offers little outside the conventional tropes of a horror-thriller with a few Freudian tweaks and a subtle hint in the closing seconds which leaves us with a nagging suspicion that Mary isn’t entirely as innocent in the tragedy as it first appeared.

Shut In subverts no expectations nor overturns any conventions, but it does use its modest budget effectively. However, it can consider itself darn lucky to have acquired Naomi Watts to carry what is ultimately, a competent but unoriginal movie, with her oft-praised expressiveness and diligent force of character.