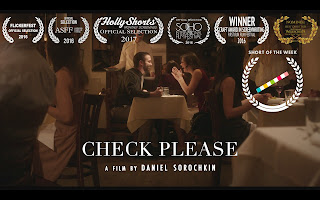 Susan Omand gets a table for one and enjoys some people watching with the short film Check Please...

In a fancy restaurant, Ben plans to propose to his long time girlfriend, Laura, only to find out that his ring was mistakenly sent to the wrong table.

Billed as a romantic comedy, if this short was set in a stately home in England in the 1920’s it would be classic theatrical farce, of the type written by P G Wodehouse, as everything that can go wrong for the hapless couples, does go wrong and everyone ends up falling out with everyone else with a suitably smug ending. So it was interesting to see how the genre translated to the modern day American setting selected by the writer/director Daniel Sorochkin. To be honest, I’m not sure it was entirely successful in its translation as I couldn’t help but replay it in my head in the era and accents that I felt it should have been. However the comedic aspects were still very strong, with visual humour and absurd situations definitely raising a smile as the plot progressed.

The acting and dialogue meant, hopefully intentionally, that each of the five main characters (two couples, played by Jacob Trussell, Amelia Brain, Matthew Porter and Emily Dennis with Bryan Manley Davis as the suitably camp Maitre d’) all got on my nerves immediately and for different reasons. I could find no redeeming qualities about any of them as the film went on and I couldn’t drum up any sympathy for any of their predicaments as all I wanted to do was slap some sense into them. However this makes the film good art, if this was indeed intentional, as there is nothing worse than an unengaging (pardon the pun) character. Therefore I’m calling it genius character development on the part of the writer, as it is rare in such a short film to evoke such strong feelings against characters in so short a time. And it’s a great showcase for the acting talents of the five to play such dysfunctional characters, unless of course they’re like that in real life. Which they’re likely not. What they are though are names to look out for in the future.

Much to like then, or at least to enjoy disliking, and I look forward to seeing what Daniel Sorochkin does next.

Check Please is currently playing on Short of the Week.