Project: RPO - Back to the Future 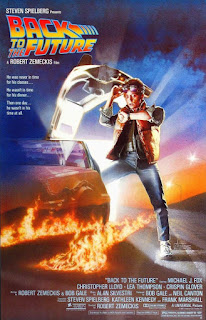 Our small band of Gunters here in The DreamCage universe are reviewing every film mentioned in Ernest Cline's Ready Player One. This week, Nate McKenzie accelerates to 88 mph and heads Back to the Future...

Quick, name a movie that is more universally beloved than Back to the Future.

You might have come up with one of the usual suspects: Gone With The Wind, Titanic, The Lion King, Star Wars, The Princess Bride, Home Alone, Breakfast Club. All classics, all loved by many, many people.

Then, above all of those, there's Back to the Future.

The 2015 documentary Back In Time, directed by Jason Aron, is a celebration of fans devotion to Back to the Future. All the aspects of fandom are well represented and there are insightful interviews from Robert Zemeckis, Bob Gale, Michael J. Fox, the rest of the cast, Stephen Spielberg, and other lifelong devotees such as Dan Harmon. For 1 hour and 35 minutes, Aron goes to every length to pay respect to the elements of Back to the Future that have caused so many people to fall in love with the film.

But if you've seen the movie, especially if you saw it first as a kid in the 80s or early 90s, you don't need an explanation for why the movie is so incredibly popular. From the perfectly fluid opening scenes to the spiralling climax at the Enchantment Under The Sea dance, the movie is perfect in almost every way. The first few scenes utilize sound as the key storytelling device in a basic, understated way that sets up how crazy Doc Brown is. Later on in the movie, the visual aesthetics set a standard for believability that most other movies from the era couldn't come close to capturing.

Every single facet of Back To The Future is pure movie magic. As Spielberg puts it, Back to the Future "Defines the taste of buttered popcorn".

On any list of "Must Watch" movies for fledgling movie buffs you will find the adventure of Doc and Marty at the top. As is the case with many other beloved films, the mythology behind BTTF is a large part of what makes it a legend of film canon.

When the producers tried to sell Disney on the script, the studio said it was nothing more than a movie about incest; but all the other studios said it was too wholesome.

Also, Christopher Lloyd was not interested in the script initially. I can't even imagine who else could have played Doc Brown.

Then there was the well known debacle surrounding the initial casting of Eric Stoltz as Marty McFly. The lack of chemistry on-set between Stoltz and the other actors almost prevented the movie from getting finished.

Of course, that's when Michael J. Fox came in and literally saved the day.

What strikes me the most about Michael J. Fox in his role, and in fact in his interviews on Back In Time, is just how naturally funny he is. Parkinson's Disease is a sunnuvabitch, but Fox has never let his ailment derail him from his natural ability to bring a smile to the faces of the people who adore him. Just this past Sunday, during the Oscars broadcast, Fox, along with Seth Rogen, came out on stage in a DeLorean and the crowd gave an extended standing ovation. Even other celebrities recognize how iconic Michael J. Fox is. He may not have the status that Leonardo Dicaprio or Meryl Streep have, but there is no one on Earth petty enough to say an unkind word about Marty McFly.

The thing about Marty, for me, that really transcends the character from greatness to a realm of astronomical reverence is that he was actually... kind of a dork, but we (and Seth Rogan) remember him as being the epitome of cool. Marty wanted respect from others because he had self-respect and understood his own worth. I learned from Marty McFly that being cool is not a matter of trying to be, but a result of being unapologetically happy and comfortable with yourself. The reason the character of Marty McFly comes across that way is because the actor portraying him is the embodiment of those traits.

The other actors in Back to the Future were perfectly cast as well. Lea Thompson *fawning sigh* as Lorraine and Crispin Glover as the wimpy, nerdy George McFly seemed as if the roles were written for those two specifically.

Without a doubt, though, no one else in film history but Michael J. Fox could have played Marty McFly. He was definitively perfect for that role, stemmed from a perfect script which became the perfect film.