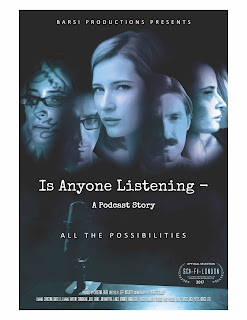 We love audiobooks and full cast audiodramas here on The DreamCage and were excited to hear that Sci-Fi-London's Super Sonics Audio Panel will feature the premiere of the audio-drama documentary Is Anyone Listening: A Podcast Story...

In a journey to realize her own potential as an artist, Christina Barsi inspires a team of creatives to come together and join her in the two-year-long creation of DIMENSION, a science fiction podcast narrative exploring issues of time, space and fractured identity.

The panel of experts will discuss why audio is the most important element in storytelling. Whether as an audio drama, on film or in new VR immersiverses, they aim to explain how what we hear helps to stimulate the imagination, especially when it comes to dramatising sci-fi. With visualisations, audio clips and the premiere of Barsi's new documentary, directed by Jeff McCarty, on the making of her show, you may end up believing that worlds beyond our knowledge really do exist.

For those that haven't yet discovered the audio drama DIMENSION online, here's the synopsis:

A traumatic experience causes a young woman to enter a new dimension, bending and breaking the time continuum as we understand it. Not only does she have no memory of her previous life but she has entered this new dimension split into three separate people, Shondra, Henrietta and Lou. They go through this new life without any knowledge of each other, at least not right away. Taking place primarily in Reno, Nevada, the girls begin to create new identities and relationships. Shondra as a CIA agent, Henrietta as a theoretical physicist and professor, and Lou as a genius decoder and world-class criminal.They each have an uncontrollable taste for vengeance and a mysterious feeling of heartbreak while seeking answers to their mysterious past.

You can find out more about DIMENSION on Barsi's website and get more info on the Sci-Fi London panel and the world premiere of her documentary HERE.