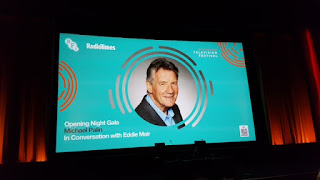 At the Opening Night Gala of the BFI/Radio Times Festival of TV, Ren Zelen prepared herself for In Conversation with Michael Palin ...

“Be prepared,” I was warned before the opening gala night of the BFI/RadioTimes TV festival, “for an onslaught of amiability.”

This hint came from a friend who had previously seen Michael Palin in action, and so I settled down in my seat, ready for an evening of consummate cordiality.

If there were only one word which might describe both Mr Palin and his audience, it would probably be ‘amiable’. A sense of bonhomie was palpable from the outset with a gentle banter established between Mr Palin and his dialogist for the evening, the golden voiced Eddie Mair, of BBC’s Radio 4.

The genial conversation was punctuated by clips of Michael Palin’s long and varied career, many of which had been sourced from the BFI’s own valuable TV archives. What a diverse career it has been: comedian, actor, writer, train-buff, traveller and television presenter. In the late 1960s he co-wrote and appeared in the TV show Do Not Adjust Your Set with other newcomers such as Terry Jones, Eric Idle, Terry Gilliam, Neil Innes and David Jason.

He spoke with affection about his early writing days with Terry Jones:

“When Terry and I were writing together during the 60s, whenever a new Beatles album came out we were at the shop first thing to get our copy. We put off a day's writing to get to grips with the White Album. It influenced us very much, not just the music but what The Beatles stood for…The Beatles represented something sort of young and fresh that we hoped we were also a part of.”

The show led to a phone call from John Cleese who wanted to work with the team. Thus Monty Python, and comedy history, was created. Palin appeared in some of the most famous Python sketches, including ‘Argument Clinic’, ‘Dead Parrot Sketch’, ‘The Lumberjack Song’ (which he agreed to sing for us – in German), ‘The Spanish Inquisition’, ‘Bicycle Repair Man’ and ‘The Fish-Slapping Dance’.

He spoke about the irreverent, experimental hit-and-miss approach of Python’s sketches, and of the more adventurous, risk-taking attitude of television companies during those heady days. He went on to muse upon the unpredictability of what might become a cult classic or a well-worn catch-phrase.

Their relationship with Cleese however, was not always an easy one:

“He was very funny, and he appreciated good writing from others, so that was fine. Until the third series, when John wanted to go, and people started to ask why. Whenever humour is taken out of the equation, the Pythons don't necessarily get along that well. Comedy brought us together… Something about John was always very unsettled, I felt. There was always something else he wanted to do.”

Palin went on to praise Cleese’s ex-wife and writing partner Connie Booth, who he later sought out to act in his own movie project ‘American Friends’ (1991). 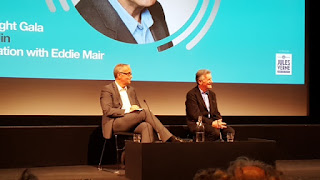 After the Monty Python television series ended in 1974, the Palin/Jones team worked on Ripping Yarns, an intermittent television comedy series broadcast over three years from 1976.

Palin’s career developed into more varied acting roles. He attended the ultra-exclusive Shrewsbury School, and went on to pinpoint his love of acting as originating there - where he discovered a fascination with observing his schoolmasters and their foibles and then imitating them for the amusement of his peers.

He appeared in the comedy A Fish Called Wanda (1988), for which he won the BAFTA Award for Best Actor in a Supporting Role, yet confessed to being unimpressed by the script and spoke of the bemusement of co-star Kevin Kline, trained in New York as a stage actor, at the idea that it was possible to shoot a scene in one take. In fact, Palin himself expressed his frustration at repeating a scene several times, particularly in comedy, as it removes all spontaneity and drains it of energy – “When shooting a funny scene, you should always be on the verge of laughing yourself”.

In 1991 he acted in social-realist writer Alan Bleasdale’s film, G.B H. described as ‘a liberal madman's odyssey through a farce of life in Great Britain’ alongside Robert Lindsay and Julie Walters, and has enjoyed stretching his abilities as an actor in several serious roles, most recently in the 2014 TV mystery thriller, Remember Me.

The audience had many questions regarding his love of travelling and about his experiences when he began a new career as a travel writer and TV documentarian. His journeys have taken him across the world, including the North and South Poles, the Sahara Desert, the Himalayas, Eastern Europe and South America.

Eddie Mair quizzed him about his apparent misgivings when he first began his travel documentaries, and Palin admitted that it took him a little while to feel comfortable in his new persona, until he realised that his best option was not to try and fit into a role, but just to be himself.

Michael Palin has had many honours heaped upon him. In addition to having a reputation as a ‘thoroughly decent, nice chap’, he has an asteroid which bears his name - Asteroid 9621 Michaelpalin.

He had not one, but two trains named after him - The Virgin Super Voyager train number 221 130 and National Express East Anglia British Rail Class 153 (unit number 153335) - “I always hoped I’d get my train, but I always end up in Delia Smith!”

In 2000 he was honoured as a Commander of the Order of the British Empire (CBE) for his services to television. From 2009 to 2012 Palin was the president of the Royal Geographical Society. On 12 May 2013, he was made a BAFTA fellow, the highest honour that is conferred by the organisation.

His latest honour was presented that very evening - the audience joined Eddie Mair and Ben Preston, the editor of the Radio Times, in welcoming Mr Michael Palin into the Radio Times Television Hall of Fame. He is the second inductee, preceded only by his all-time hero, legendary broadcaster, David Attenborough – “He’s ninety, and he’s STILL doing it! None of us are allowed to retire before he does…dammit!” 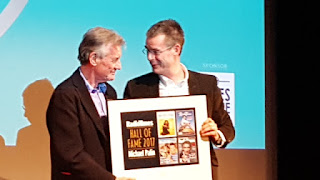