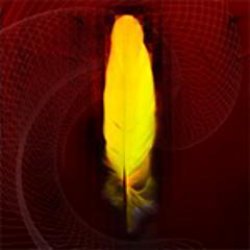 I was introduced to the Vurt many years ago by a friend, it was an initiation, like we did with records back then, 'you have to hear this' no warnings just "read this" a dare almost as if it were secret, illegal or dangerous, which in a sense it was, with its mind altering subject matter and lysergic language. It received the recognition it deserved, winning the Arthur C. Clarke award for science fiction in 1994. Then regular doses of 'Noonism' where injected into the literary stream until 2004's Falling Out of Cars. Starving his fans of work for ten years until 2012’s self published eBook only Channel SK1N reintroduced us to his special kind of syntax. Manchester featured heavily in his earlier work so with him moving to Brighton about 20 years ago I wanted to catch up with one of Britain’s best cult authors and probe him about his work and why he choose to relocate to Brighton.

You've created some strong, memorable characters in your books, which one of them resonates the most with you and offers a glimpse into your own personality?

Well, obviously Scribble from Vurt means a lot to me, just because he was there at the beginning, and like many author’s first characters he was filled with energy from all the years of rejection slips and waiting, waiting, waiting. But in real terms he was actually based on a friend of mine from the Manchester days. You always write yourself in every character in some way, even the villains and the walk-on extras, so it’s difficult to choose a real favourite. I tend to see the books themselves as characters, and each one resonates with my life at the time of writing. But if I had to choose a character I would say Marlene from Falling Out Of Cars, because she’s lost in the world she doesn’t really understand! Which is me, most days.

Oh God, difficult question! I was never one for making predictions. Two routes: either we’ll be ingesting stories directly in some way, or else a great catastrophe has sent us back to storytelling around camp fires. I think SF has a better chance at a life in the latter circumstances, to be honest. I’m not sure what it’s purpose will be in a world where every single thing is being scanned and digested instantly, via implants or whatever; it will have very little to fight against. The genre will of course last as an escape valve, if nothing else. Fantasy is such an important part of our make-ups as human beings. That side of the genre will always be needed. In the catastrophe scenario however, SF will become prime: the new myths will need to be created.

Self-publishing seems to be gaining popularity as the stigma of 'vanity' press subsides, is the physical book obsolete? Do you even care?

Actually, I love the physical book; it’s one of favourite objects of all time. So in this household it will definitely hold its own. I can’t see it disappearing to be honest. I feel it’s a much better carrier for narrative than anything the digital world has yet come up with. Whenever I’m on a train and someone is reading a Kindle, or whatever, I always make sure to bend the pages of my book back, or to take a great sniff of the paper, especially if it’s old and second-hand! I love the way in which analogue objects age and show their wear and tear, the user’s love and hatred are mapped onto them in a very intimate fashion. The digital world can never equal that. As far as self-publishing goes, there are more opportunities now to publish your own paperback books; many people are taking that route as well as the purely digital one. It’s good to have both options, but for me, (an older type of person), you can’t beat individualised objects in the world, rather than info hidden in a small black box.

Collaboration and cross-pollination seem prevalent axioms in your work, how important is the individual voice and authorship to you?

Very important, actually. Most of my pleasure as an audience member comes from intensely individual art, whether it be music, books or poetry. That said, I’m always open to collaboration and partnership, if the circumstances are right. I find it’s best when the piece self-regulates, like the Echovirus tweets do. It doesn’t needs managing in any way. But for more elaborate or complex worlds, I like to be in control, working alone unusually, or with one other equal partner. There are pros and cons to both approaches. But there’s still something incredibly exciting about an artist leading you on a journey that they, as an individual, have made up; there’s a slightly dangerous edge to it, to then saying, “Come this way. Follow me.”

Playfulness and experimentation are also key elements in your work. How serious is writing to you and articulating specific thoughts?

Well, I love to experiment, and I love to tell stories, so the two go hand in hand for me. Sometimes I will veer towards a more experimental approach, and sometimes towards a straighter expression. For me it all depends on the subject matter; how will this subject have the best life? What is the best way to bring out the potential in the subject? Is it a straight story, or something that needs a weirder form? Answering that question is an important part of the process, and the answers can change over time. Sometimes stories change their form halfway through, they suddenly veer off along strange tangents, or they get reined in. There are no rules. Narrative is a very fluid world, until the final full stop. And even then the work can have an afterlife where other people can change it for themselves. I’m open to such things.

Your early novels are set in (an alternative) Manchester. Has Brighton had a similar influence on your writing?

No. I made a conscious decision to not try to articulate the new city in my work. I’d spent a good number of books trying to capture Manchester in words. I wanted a change. But Brighton does influence my work, obviously, in more social ways, through working with friends, or joining the local arts scene. 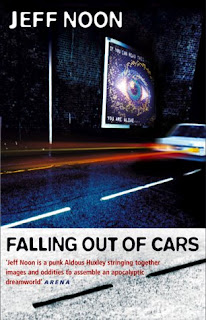 I detected echoes of Brighton in Falling Out of Cars, is there also some Vurtesque version of Brighton lurking in the peripherals of your prose?

Falling Out Of Cars was the book that marked the journey, for me, from Manchester to Brighton. The characters go on the journey, so yes it’s a connection. But once they arrive, I don’t have any interest in them exploring the city in the same way I did with Manchester.

For the uninitiated which of your books would you recommend as a jumping in point and why?

Either Vurt or Pixel Juice. Vurt because it’s full of youthful energy, and Pixel Juice because it shows the full range of interests and styles that I like to explore.

You cite Music software, studio production techniques and effect units as inspiration for your writing. Are you any closer to building your "word processor with effects"?

No closer in terms of machinery. But I continue to experiment just with pen and paper, which is my preferred medium for coming up with new ideas. It’s pretty old school, I know, and very analogue, but I like the freedom it gives me. Especially in terms of a visual approach. My doodles become words and vice versa. And sometimes, something good grows out of the page.

Do you have a favourite word or phrase? and why?

Incunabula is my favourite word. I first saw it as the title of Autechre’s debut album. Then I learnt that it’s the plural name given to very early printed books, those produced before 1501. It has a more general sense of the beginning or first stages of any process. In etymological terms it comes for the Latin word for cradle. It’s just a brilliant word, both in meaning and in its look and feel on the page and in the mouth. The singular is also pretty cool: incunabulum.

As Voyager 1 heads into the outer reaches of space, it carries a gold record containing music, field recordings, samples of languages and biological information about humans amongst other data. If you could choose a piece of music, literature and a scientific fact to share with potential alien life forms, what would they be and why?

My favourite piece of music ever is Benjamin Britten’s song “O Soft Embalmer of the Still Midnight.” I think it represents the highest achievement of human art. So that can go in to show how we express ourselves at the rarefied peaks. I would then balance that in art with a Grayson Perry pot showing life on the British council estates; it will show that we’re capable of having crazy fun! I’m a big fan of mathematical formulae, even if I don’t understand them all. My favourite is Euler’s identity. That should definitely be included in Voyager, just to show that we can build amazing things that aren’t actually real objects. It’s a work of astonishing beauty.

If words were seeds what would the plants look like?

Watch out for the Venus word-trap plant. It catches and devours passing remarks.

Writing is a very personal undertaking, some use it as mediation or a form of exorcism, what's your relationship with your words?

A means of reaching out to people. I’m a very private person, prone to periods of isolation. So writing is a way of saying that I’m here, I’m alive, and that hopefully I have something to value to offer. In psychological terms it stems from a very lonely and troubled adolescence; that’s when I first started inventing fantasy worlds for myself.

You’re very open about your writing techniques both online and in Cobralingus. How do you surprise yourself and keep it rewarding and fresh?

I can swing between opposites quite easily. And my friends tell me I’m filled with contradictions. I’ve never found it difficult to hold two opposing views at the same time. In fact, I always get nervous around people who have very fixed belief systems, whether political or religious. So I can suddenly decide to do a very different kind of story than the one I’m currently working on. I guess I flit around from project to project. Finally I’ll settle on one thing, and then I’ll really commit to that one, to the detriment of everything else. Just putting words on the screen or on paper is reward enough; to feel a story unfold and to give live to it. That’s still very exciting for me.

With such an array of writing tools and thought triggers do you ever suffer from writers block? If so how do you break it?

No, I never suffer from writer’s block. In fact, the opposite: I usually can’t stop writing, and I have to learn to sort the wheat from the chaff. I do find it easy to make words flow. Of course, not all of them are good! But the flowing part has never been a problem for me. I type so quickly and so badly that I always have to change many, many, many errors.

And finally the classic: if you could be an animal what animal would that be?

A cat. Just an average domestic moggy lying in the sun, waiting for the next meal to be served.


Editor's Note - this interview was first conducted in 2014 and is published here for the first time with the kind permission of both authors. Dates have been edited to reflect the timeslip.