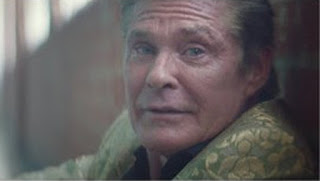 Yes that is David Hasselhoff in the picture. His larger than life character appears as The Hoffbot, in BAFTA-winning director Oscar Sharp’s latest short film, IT’S NO GAME. The film sees the former Baywatch and Knight Rider star being controlled by an A.I, named Benjamin, an algorithm specifically designed to write movies.

The lines of reality and fiction become blurred in It’s No Game, as the notion of an algorithm writing films quickly hits home, considering the film was in fact, written by an algorithm. With creative thinking supposedly being one of the defining traits of humanity, how soon before these definitions are broken down and we are no longer able to tell the difference between AI and human thinking?

It's No Game was made as part of the Sci-Fi London 48 Hour Film Challenge, where short films of between 3 and 5 minutes (excluding titles and credits) had to be created over the weekend of 8th and 9th April having been given the Title of the film, a line of Dialogue, a list of Props and an optional Science theme. It made the shortlist to win the Challenge and it will be very interesting to see what Benjamin does next.

Watch the short film below and let us know what you think. With another screenwriter's strike in the offing, should they be worried?

The Sci-Fi London Film Festival runs from from 27th April – 6th May. Find out more - https://sci-fi-london.com/