Film - What If: The Helen Gibson Biopic

Steve Taylor-Bryant doesn't need a Hollywood stunt double to write his next What If? feature. He wants to make The Helen Gibson Biopic...

There has been an advert on British television recently, I think it’s for some kind of age defying cream you put on a lady’s face to make her look, well, like she already does as these things are always a con... however it involves a female stuntwoman standing in for a young and beautiful actress. This got me talking to a colleague about stunt people and, after the inevitable chinwagging about The Fall Guy and the waxing lyrical about Hooper (honestly the best stunt related film ever made,) the conversation got back on point (I was surprised too) which was female stuntwomen. To my shame I could only mention two, Zoë Bell (Iron Man 3, Death Proof, Xena: Warrior Princess) and Helen Gibson, who my grandad had told me lots about as a child rewatching various westerns and the like.

I should have next educated myself and continued to research other ladies of the stunt world but something just kept bringing me back to Gibson. Other than my grandad’s exclamations that the “woman was completely nuts” I didn’t know that much about her and, the more I read, the more fascinated I became. This was an undoubtedly brave person, doing some extreme stunts in a time before health and safety, but more than that this was a woman. Yes, a woman, working in the early days of cinema in a society where woman weren’t supposed to do anything other than have children or look pretty alongside the uber important man if they were to be on screen. This was a woman who was impeccable in her planning and skill, especially when it came to horse stunts. This was a woman who wasn’t credited for a lot of the work she undertook, not like today where everyone to the tea boy gets a mention in the closing credits, and very often went unpaid as well as having to overcome serious injury and infection to continue working just to make ends meet. This incredible lady of the silver screen needs to be better known, needs to finally get the credit she deserves and needs to be thanked by Hollywood for the work she accomplished, not just within the project she worked on at the time but also for paving the way for the likes of Zoë Bell.

So, it’s time for one of my imaginary pieces where I get to play studio executive and cast a dream film, hire the crew of my choosing and hopefully come up with a film project that you will want to go and see.

I am going to come to the part of Helen last as I want to get the behind the scenes right first. We need a writer adept at getting to the soul of a real person that unfortunately they cannot meet, due her passing in the 1970’s, that can also add the dramatic elements of working on stunts and rodeos into a compelling narrative. This is actually the hardest of the three components I need to make this film work. You’ll see from my choice of actress in a bit that, whilst it was a tough search, it eventually becomes a no-brainer and my directorial choice popped in my head the minute I sat to dream up this idea. The writer, though, is a tough one. There are many good writers in the world, some excel at writing action, some at character defects or moral ambiguity, some are great at a combination of things and some are perfect for biopic material but not necessarily the stunt stuff. I need a writer that can really bring Gibson to life and show how fascinating she was but still get to the heart of the era as well as the action scenes. After careful consideration (honestly about four weeks of researching writers back catalogues) I have chosen Shauna Cross. The ex skater and Los Angeles Derby Doll has proven action capabilities, especially through Whip It! There was also the great What To Expect When You’re Expecting and the Chloë Grace Moretz drama If I Stay, which had some great character moments and really impressive dialogue. I think with the ability to write drama as well as some lighter moments, in Shauna Cross we would have the brilliant script required for my next woman of Hollywood to go to work.

The choice for director was simple. Lexi Alexander has done some fantastic work within superhero television of late, showing great craft in fight scenes and stunt work that first came to my attention in Green Street about 12 years ago. For some reason, though, since Green Street the big screen opportunities seem to have dried up. Well what a way to make a comeback, directing an all-action biopic about a strong woman in Hollywood.

So, now to Gibson herself. So many things need to come together for this choice to work. They have to be convincing as someone that could jump onto the roof of a moving train, they need to bear a little resemblance to Helen Gibson because, unlike a book adaptation, when you do something about a real person you need to keep the audience grounded in the reality so some familiarity in look would be advantageous. They also need to be a convincing character actor, someone that knows how to bring a dream from the page to the screen. Emilia Clarke is my choice. I have always admired her work, even Terminator Genisys was better for her involvement. Game of Thrones shows that expectations can be handled as well as fanbases built and the excitement I have for the forthcoming Above Suspicion, by the way a true story, has me convinced that Emilia Clarke is perfect for this little dream of mine. 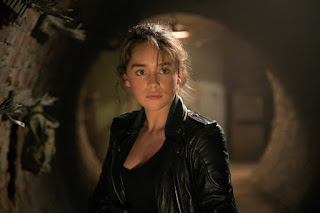