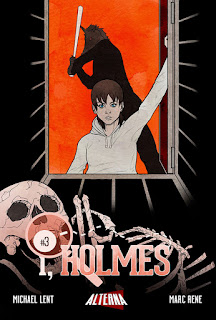 The endgame is in play as Susan Omand gets back on the trail with the conclusion of I, Holmes, thanks to Alterna Comics...


i Rose, the girl with no given name, discovers her true identity, but is it too late to stop a killer bent on revenge?

It’s been five months since I last entered the world of i Rose and her friend Annie Stow, so I thought a quick refresher of issue two (my review here) was needed before I delved back in. However, it wasn’t really needed because this issue actually starts with i Rose’s thoughts of recent events swirling round in her head as she sleeps, a handy way to do a catch up without doing a catch up. A call with the police inspector on the case does the rest, as she explains about the masked villain, the weapon and the intended target so we’re all up to speed in a couple of pages.

Then it’s on with the rest of the story and, it appears, this is the issue where the Holmes connection becomes more overt, as i Rose discovers more about her past thanks to a visit to the church where she was abandoned as a baby and finds a trunk with clothes, trinkets and photographs from her five-greats grand-mother. And this is how she finds out what the i in her name stands for. Think about it for a moment and you’ll get it, I’m not going to give it away.

Revelations made, the story continues with a call from the masked villain, whose ancestry we also now know, and an exciting shoot-out in the cemetery. Before that villain is finally unmasked as being....

The first thing I must say is how much I love Marc Rene’s cover art of this one! Red and black are go-to’s in my own art and here they work very well with strong framing to create a very eye catching frontispiece. In fact the art overall was its usual very high standard, with its trademark use of unusual panelling to add interest - loved the use of the film strip shapes in the initial dream sequence. And the lettering must be applauded as there was a lot of story to fit into a small space in some sections while still keeping it clear who says what. And the second thing? Is how much the fact the cop in this story being called Les Trade still really tickles me. It was a lovely nod to the original canon.

That said, this wasn’t quite as good an ending issue as I had hoped for with this story. The action is all there, with gunfights, bike chases and such but the cleverness of the previous issues seemed to have gone – it was all somewhat obvious for me, just a bit "oh, is that it", which is a shame. I get the feeling that, at the end of issue 2, a decision was made to wrap up the story in more of a hurry than was originally anticipated, although that may not be the case but it is how it comes across. So we got the Reader’s Digest ending, rushed and convenient with no frills, which is a bit of a let down as the characters and overall intrigue developed over the first two issues could really have stood up well in a 6 issue story rather than 3, had Michael Lent had the courage of his convictions, and enough confidence in his ability to hold an audience, to keep going with the depth and complexity.

However, it’s still a good story, and another is teased at the end of this issue, so I will look forward to seeing how (if?) the next pans out now that we have i Rose’s origins story and the main adversary out of the way... or do we?

All 3 issues of I, Holmes are available now from Comixology
Email ThisBlogThis!Share to TwitterShare to Facebook