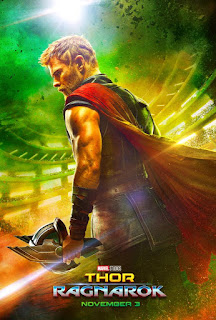 ICYMI yesterday, the new poster and trailer for Thor: Ragnarok has been released...

And we gotta admit the new Marvel offering looks to be Hela good fun, (see what we did there?) with a lot for the fans. In case you've been living under a Ragna-rock (and again? No? Nevermind) here's the synopsis.


Thor (Chris Hemsworth) is imprisoned on the other side of the universe and finds himself in a race against time to get back to Asgard to stop Ragnarok, the destruction of his homeworld and the end of Asgardian civilization, at the hands of an all-powerful new threat, the ruthless Hela. (Cate Blanchett looks absolutely amazing in the trailer btw - check out the fancy hat).

Out on October 27th and directed by Hunt for the Wilderpeople's Taika Waititi, all the usual suspects are in there, yes including Hiddleston's Loki, and the trailer also shows the stupendous Jeff Goldblum as the Grand Master with Tessa Thompson as Valkyrie, with glimpses of Idris Elba as Heymdal, Karl Urban as Skurge and we're still looking forward to seeing Anthony Hopkins as Thor's dad, Odin... I know, right?

Oh and there's another well known face in the trailer. But it's ok, "We know each other! He's a friend from work..."