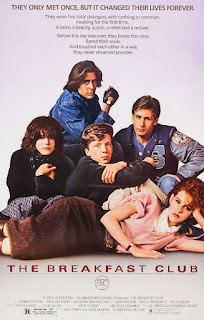 Our small band of Gunters here in The DreamCage universe are reviewing every film mentioned in Ernest Cline's Ready Player One. This week, Nate McKenzie gets detention with The Breakfast Club...


"...And these children
that you spit on
as they try to change their worlds
are immune to your consultations.
They're quite aware
of what they're going through..."

I have a good friend who is a few years older than I am. Until last year, she had never watched The Breakfast Club. It astounds me that anyone 35 or older could have gone the majority of their lives without watching one of the greatest movies ever made.

She and I aren't friends anymore. I don't need that kind of poor opinion-having in my life, Carissa.

When you think of great 80s movies, The Breakfast Club is one of the first to come to mind. That's because everything about it is indelible, impossible to remove from the conscience of post-adolescent America. There are plenty of movies that deal with the high school popularity hierarchy, but for the most part, other films in the genre end with one group or another achieving some sort of upper hand, a victory in some way. John Hughes created an accurate depiction of life as it is in high school for teenagers, which then cascaded into a kind of high school utopic scenario. The "sporto" ends up with the "basket case"; the "princess" with the "criminal". Unrealistic? Probably a bit. But in retrospection, that is what we all wanted in high school, wasn't it? So, unrealistic would be a false description; unattainable is more accurate.

The Breakfast Club showcases so much young talent in one place. The minor nuances of each character are beyond impressive (especially those on display in 16 year old Sheedy's portrayal as Allison, one of my favorite characters ever). The entire film is raw, undulating teenage hormones and emotions. Hughes accomplished that level of intuition by trusting in his fledgling actors and letting them ad lib a significant portion of the dialogue. In fact, the entire scene in which the kids discuss their reasons for being in detention was ad libbed. That is precisely why the film connects with people (especially those that watch it when they're young); the things the characters say aren't just believable, they are things we've each thought and felt in our youth. Our disdain for our parents, feelings of loneliness amidst a crowd of peers, insecurity, fear of the future, the desire to be a part of something; all while on display in the most awkward, bizarre time in our lives. 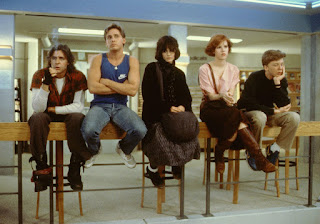 "We're all pretty bizarre. Some of us are just better at hiding it, that's all."

But even beyond Hughes' ability to properly convey tumultuous teenage ambience, what really stands out to me is how he was able to shed a sympathetic light on the washed-up Principal Vernon.

Throughout the film, Vernon is an asshole, but after his heated argument with Bender in which he doles out multiple detentions, he stands in the hallway and has a moment of stark introspection. You can see him struggle with how he handled himself. Later, his conversation with Carl the janitor elicits a modicum of compassion, especially upon rewatching the film as an older, wiser human. Vernon feels disrespected by the kids, believing that each year, the kids get progressively worse. But Carl reveals what I believe is the heart of the message within the film:

"The kids haven't changed, you have."
"These kids turned on me. They think I'm a big fucking joke."
"Listen, Vern, if you were 16, what would you think of you?"
"Hey, Carl, you think I give one rat's ass what these kids think of me?"
"Yes I do."
And in that scene, you realize that Carl the janitor is not a peripheral character, but rather the true subconscious of the film.

John Hughes wrote twelve of the greatest films of the 1980s; six of those films are some of the most perfect portrayals of life as a teenager/young adult that you'll ever see: Sixteen Candles, Weird Science, Pretty In Pink, Ferris Bueller's Day Off, and Some Kind of Wonderful.

From beginning to end, The Breakfast Club is the pinnacle of that list.