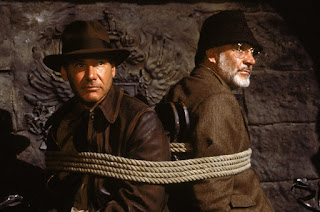 Our small band of Gunters here in The DreamCage universe are reviewing every film mentioned in Ernest Cline's Ready Player One. This week Steve Taylor-Bryant takes on Indiana Jones and the Last Crusade...


After Adolf Hitler & the Nazis fail to obtain the Ark of the Covenant, Hitler orders the SS and Wehrmacht to go after the cup of Christ - the Holy Grail. Indiana Jones is pressed back into action after a mining magnate's lead researcher disappears mysteriously. The lead researcher is none other than Indy's dad, the feisty Professor Henry Jones. Meeting up with Dr. Elsa Schneider in Venice, Indiana & Marcus Brody discover that a 2nd marker that reveals the location of the grail is buried in the catacombs of a converted church. Escaping from rats, fire, gunmen, and a ship's propeller, Indy discovers that his dad is being held in a castle on the German border with Austria. When he & Dr. Schneider reach the castle Indy locates his father, but Elsa proves herself a turncoat, and even worse - so is the mining magnate, Walter Donovan! After Indy & Henry escape the castle, they head to Berlin to get the map & Henry's diary that provides critical information to those who seek the Grail. Marcus, however, is kidnapped by Nazis in Iskenderun, and Indy & Henry meet up with Sallah and start their own journey toward the 'Canyon of the Crescent Moon'. They run into Donovan & the Nazis, and a huge fight ensues. Will Indy obtain the Grail and gain eternal life for himself & his father, giving the world a future of light, or will Adolf Hitler & the Nazis triumph and send the armies of darkness marching all over the world?

Whilst I genuinely believe that Raiders of the Lost Ark is one of the greatest cinematic adventure films of all time, The Last Crusade is still my favourite of all the Indiana Jones films and that’s down to charisma and chemistry. Harrison Ford has always been charismatic, it’s one of the reasons films like this don’t date, he’s a throwback to the Cary Grant generation, a proper film star. Casting a younger version of his Indiana Jones phenomenon is a task that not even I would have taken on and I love recasting things. How do you get that right blend of looks, eye twinkle, humour and action star without using some awful blend of CGI to make Ford look like a young man? River Phoenix is how. What a star we lost far too soon when he tragically passed. Phoenix was perfect in everything he did, another star that had the opportunity arisen would have, like Ford, shown himself to be a throwback to an age of pure talent and charisma. His scenes in The Last Crusade are all too brief but show what can be done with charisma and raw natural talent.

Then we get to the chemistry part of my love for this film and that involves the father and son relationship between Ford and Connery. Unlike Ford, who rarely disappoints in a film, Connery is hit and miss for me due to his inability to play anyone other than Sean Connery. Whilst that may be great and good for things like James Bond, and maybe The Untouchables, it really doesn’t work for every role (who on earth cast him as a Spaniard in Highlander?). Here though, all he has to be is charming, which is his greatest gift, and funny, which he does naturally and with aplomb. His chemistry onset with Harrison Ford is second to none and the single greatest part of a very good film. With anyone else in the role of Professor Henry Jones then The Last Crusade is just a fairly good adventure film and could have been more along the lines of The Crystal Skull, a film with no chemistry whatsoever and so many phoned in performances.

The Last Crusade works as an adventure film because Spielberg rarely gets these types of films wrong. It’s pure escapism in the style of the old adventure comics and books of my youth. But without Ford and Connery and what they shared with us during The Last Crusade it would never have hit the heights it did, or move Raiders of the Lost Ark from the point of my heart that it was in once.