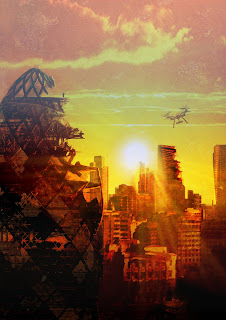 Sci-Fi-London Film Festival has launched the full programme for its 17th year...

The festival will run from the 27th April until the 6th May 2017 across London with ten days of amazing film, live music, immersive experiences and more. It will showcase a fantastic lineup with 6 world film premieres, 13 UK film premieres, 11 world short premieres and 13 UK short premieres. It will host 25 features, 51 shorts and 4 VR shorts alongside its regular classic cult events such as the 48 HOUR FILM CHALLENGE and SCI-FIDO, the world’s only cosplay for dogs... 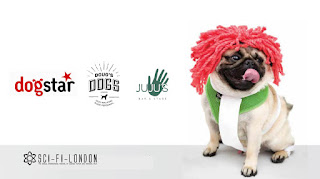 Opening this year’s festival on the 27th April at the Rich Mix is the UK Premiere of CAUGHT– a film that returns us to the great days of British science-fiction, directed by Jamie Patterson (Fractured), written and produced by Alex Francis (Moon) and starring April Pearson, Mickey Sumner and Cian Berry. It’s the story of a ‘work-from-home’ journalist couple who invite a man and woman, called Mr & Mrs Blair, into their idyllic village home. But what begins with an informal interview descends into a nightmarish fight for survival.

The festival’s Closing Night on the 6th May at Stratford Picturehouse is the World Premiere of THE RIZEN directed by Matt Mitchell and Taliesyn Mitchell and starring Lee Latchford-Evans, Laura Swift, Tom Goodman-Hill, Adrian Edmondson and Sally Phillips. The year is 1955. NATO and the Allied Forces have been conducting secret, occult experiments in a bid to win the Arms Race. Now, they have finally succeeded but what the Army has unleashed threatens to tear our world apart. One woman must lead the only survivors past horrors that the military has no way to control - and fight to close what should never have been opened.

Other major Film Premiere Galas this year include the UK Premiere of BLUE WORLD ORDER directed by Ché Baker and Dallas Bland, starring Billy Zane, Stephen Hunter, Bruce Spence, Jack Thompson. The film is set in a post-apocalyptic world in which civilisation has crumbled. A massive electromagnetic pulse has killed all children on the planet, with the exception of Molly (Billie Rutherford), the daughter of Jake Slater (Jake Ryan). Mad Max meets Star Wars? With a car chase in the desert by 7 DeLoreans this will hopefully be a reference for other films of the future.

Celebrating its World Premiere, FLORA is a brilliant début for director Sasha Louis Vukovic, whose excellent cast deliver a refreshing take on the ‘monster-in-the-woods’ canon. Set in the spring of 1929 near the end of a golden age of exploration, an expedition of Ivy League University Botanists enter an uncharted forest on the North American frontier. Tasked to study the native flora, the students unearth a deadly organism and are soon in a fight with nature itself.

Other World Premieres include YESTERDAY LAST YEAR directed by Jeff Hanley and written by Adam Bradley, this is a brilliant debut on time travel with lots of loopholes and paradoxes. SUBLIMATE, directed by Roger Armstrong and John Hickman, is based on a short film made for the SFL 48hr Challenge and is a beautiful, raw, unflinching, nihilistic satire on twenty first century life – a tale of idiocy, delusion and obsession. LOVE AND SAUCERS, directed by Brad Abrahams, is a documentary exploring issues of time, space and fractured identity. 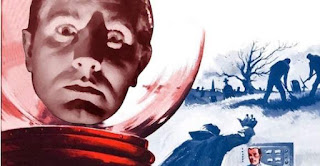 UNSPEAKABLE HORRORS: THE PLAN 9 CONSPIRACY, directed by Jose Prendes, is a docu-film focussed on Ed Wood who unleashed PLAN 9 FROM OUTER SPACE in 1959 to an audience not yet ready to look beyond the limitations of budget to what was really being said in the film. The film received a remarkable amount of backlash that, not only ruined many a career (including Eddie's), but gained the film the unwanted prize of 'Worst Movie Ever Made'. This film attempts to set the record straight by highlighting the unspeakable horrors that Ed Wood was trying to shed a light on with the help of some of the genre's best and brightest inducing: Joe Dante, Mick Garris, Fred Olen Ray, Brian Yuzna, and Larry Kraszewski and Scott Alexander (who wrote Tim Burton's ED WOOD), among many others. “Remember, my friend, future events such as these will affect you in the future” Criswell.

Other UK Premieres include: SPACE DETECTIVE directed by Antonio Llapur featuring galactic gangsters, interstellar visuals and an out of this world soundtrack and dry wit in vast amounts - this is not to be missed! DOMAIN about a deadly virus directed by Nathaniel Atcheson also celebrates its UK Premiere as well as THE FITZROY, directed by Andrew Harmer. The Fitzroy Hotel, set in a post-apocalyptic 1950s, is a derelict submarine beached just off Margate, and the last place for a traditional summer holiday. A joyous black comedy, think Basil Fawlty running the Crimson Tide.

Snowden, Assange, and even the Russians have ‘allegedly’ been putting leaked information online for a while now. When KAOS, a group of anonymous activists find some footage in a Snowden file that reveals the events surrounding the disappearance of four teenagers, they put it out there to try and get some answers. THE KAOS BRIEF, directed by JP Mandarino also celebrates its UK Premiere.

This year they’ve also teamed up with the Science Museum and their fantastic blockbuster Robots exhibition, to present a movie double-bill focusing on the world of artificial intelligence with A.I. AND EX MACHINA.

And there's so much more - far too many to mention here.

Add in a panel on Audio Productions, a Screen-writing workshop, readings, VR events, live music, a myriad of shorts and more sci-fi films than you can shake a light saber at and you have the makings of a festival that is really out of this world.

For the full line up, more info and to book tickets, visit the website: sci-fi-london.com #SFL17