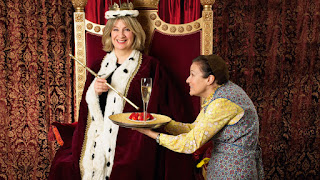 It will be one year next week (20th) since the world lost Victoria Wood. Ren Zelen attended Victoria Wood: A Tribute as part of the BFI/Radio Times Festival of TV...

On the evening of the second day of the BFI\Radio Times festival of Television, assembled on the stage of NFT1 were guests Julie Walters, Maxine Peake and BBC Drama Executive Piers Wenger. They were there to pay tribute to, and share their reminiscences of, their friend Victoria Wood with radio presenter Paddy O’Connell, and an enthusiastic audience of fans.

Victoria Wood CBE, was a much beloved English comedian, actress, singer, songwriter, screenwriter and director. She wrote and starred in sketches, plays, musicals, films and sitcoms. Her live comedy act was interspersed with her own humorous musical compositions, which she performed on piano to the delight of audiences.

Wood started her career in 1974 by appearing on the ATV talent show New Faces. Spotted by Granada head of Drama, Peter Eckersley, while on stage at Sheffield, she was given the chance to create Talent for ITV in 1979 – a sharp but amusing exploration of the lower echelons of showbusiness.

With its sequel, Nearly a Happy Ending in 1980, she began her most enduring and fruitful partnership with Julie Walters, and a third play, Happy Since I Met You, provided Wood with another long-term collaborator, Duncan Preston.

With the backing of Eckersley, Wood and Walters were given their own show in the early 1980s. Wood wrote the sketches alone, according to Julie Walters, who insisted that she never added or ad-libbed any of the dialogue - she never needed to, as Wood was an egoless performer and often wrote her best jokes for other people.

After Eckerlsey’s death however, Wood left Granada, and following a 2-year hiatus joined the BBC for her series Victoria Wood – As Seen on TV (1985-87) which highlighted her genius for observational comedy, skilful characterisation and the precise, yet nuanced dialogue which became her trademark.

The series won a BAFTA TV Award in 1986. Its most memorable creation was the spoof, Acorn Antiques. Chock full of hilariously contrived characters, ridiculous plot twists and stilted dialogue which parodied all of the ineptly made TV soaps British viewers were familiar with.

When recounting where Victoria Wood gleaned her inspiration for Acorn Antiques, Julie Walters revealed, “She just loved crap TV, the worst daytime TV, all that awful stuff – she just loved it!” 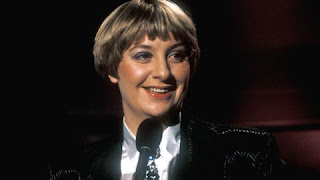 Wood won her second BAFTA in 1988 for An Audience with Victoria Wood and in her next series Victoria Wood (1989) she assembled a company of actors which she would use throughout her career, including the inimitable Julie Walters, Duncan Preston, Celia Imrie, and the widow of her erstwhile Mentor Peter Eckersley, Ann Reid.

During 1990s she wrote and co-starred in the television film Pat and Margaret (1994) and Dinnerladies (1998–2000) - Wood’s underrated sitcom set in the canteen of a factory in Manchester (“Counselling! My mother was trapped under a Blackpool tram for four and a half hours – she didn’t get counselling. She got a cup of tea and two tickets to Charlie Drake!” – only the British might be able to comprehend the complexity of the subtext in those lines, and the show, meticulously written, was full of such stuff).

Maxine Peake recalled how thrilled she was during her audition for Dinnerladies, at simply being in the same room as one of her heroes – the idea of actually landing the part seemed so unlikely. When she did so, she remembered Wood’s advice to her was “Don’t get any more Northern – or you’ll get typecast”.

BBC Drama Executive and close friend, Piers Wenger, outlined the incredible care and craft she lavished on each line of dialogue, telling him, “If I rewrite this ten times, it will be ten times better.”

While developing as a dramatist, Wood continued to refine her comedy stand-up act, examining the compromises and absurdities of everyday life with incisive wit but also with gentle affection. ‘Bittersweet’ is the adjective most often used to describe her humour. As Julie Walters said, “Her writing is like life really, it’s funny and sometimes it’s painful too”.

Fellow comedian Simon Fanshawe wrote of her: "The point about Wood is that she makes you feel comfortable and then slips spiky material in under your guard." Anyone who watches her vignette, ‘Swim the Channel’ finds their heart aching as they laugh at the comic/tragic story of a teenage girl being sent off to swim the English Channel, never to return. There are shades of Alan Bennet (who Julie Waters mentioned Victoria admired) and Samuel Beckett.

In an interview in 1984, Wood said: "I just assume that everyone believes the sexes are equal. When I go out there and make them laugh, I'm saying, 'This is my personality, I hope you like it.'"

The commentator Judith Woods wrote in 2007: "Victoria Wood is a performer for grown-ups. She has an everywoman appeal to female viewers, but none of the stridency that traditionally puts off male audiences. She isn't preoccupied with pastiche and celebrity. Real life is her forte, in all its peculiarities."

The celebrated writer Clive James, said Wood had "changed the field for women and indeed for everybody, because very few of the men were trying hard enough as writers before she came on the scene and she showed them what penetrating social humour should actually sound like."

Although we were treated to clips from her shows and reminiscences from the panel of friends on stage, the evening was also very much about audience participation. Many people stood up to share their favourite quotes, sketches, memories, and stories - their contributions were also deeply touching.

One young woman told of how her mother had come out of her school, fuming. Worried that a meeting with her teacher had gone badly, the girl had asked what was wrong. The mother had heard that the teacher had told her daughter off, saying, ‘Stop being all ‘Victoria Wood!’ Her mother then took her aside and said – “Don’t let anyone ever tell you not to be who you are, and as for Victoria Wood - that’s just being a genius!”.

Another lady tearfully commented that perhaps women seemed so angry nowadays, because Victoria Wood was no longer there to speak for them – about their trials, their middle-age worries, the realistic day to day lives of ordinary women, and now they felt abandoned and overlooked.

The atmosphere in the BFI that evening could also be describes as ‘bittersweet’.

In the autumn of 2015 Victoria Wood fell ill with terminal cancer and withdrew from public life. She died on 20 April 2016 at her home in Highgate, with her children at her bedside.