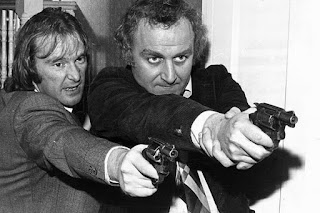 
“Look slag, I don’t give a toss who you have in your bed, but don’t try and run your numbers on me”.

Welcome to the world of ‘blaggers', ‘stoppos', ‘smudgers' and ‘snouts’. Or to put it another way, mid-1970s London and the instant (well as instant as a Ford Cortina or Humber can be even in the hands of specialist drivers) response of the Metropolitan Police’s “Flying Squad”. This being old London town, the Flying Squad was cockney rhymed with Sweeney Todd, or just “Sweeney”. Charged with tackling armed robberies, they were also known as the Heavy Mob. They usually moved to arrest armed gangs through catching them on a job, so those arrests usually involved violence since armed robbers don’t tend to come quietly. This was not, by any stretch of the imagination, ‘soft’ policing.

Quite simply, for a police TV series it’s never been bettered. First there is the superb cast, Jack Regan played by the inestimable John Thaw, looking grizzled and in his fifties even though he was actually only in his early thirties. A world removed from the quiet, thoughtful detective he would become in “Morse”, here he is lairy, ill-disciplined, morally self-righteous and quick to temper. His sidekick George Carter played by Dennis Waterman, better at trying to rein in his loose cannon superior Regan, than when playing humour as his stooge. It was a sort of gritty bromance, decades before we invented the term. They had each other’s back when bunking off with a woman while on duty, or trying to dig them out of trouble with their bosses for some rule-breaking (such as the death of a suspect in police custody). During the series, both suffered heartbreak, Regan having his daughter kidnapped, George having his wife murdered. These were deeply drawn characters.

The crackling scripts had plenty of humour in amongst the hard men who aren’t above talking with their fists. “We’re the Sweeney son and we haven’t had any dinner. You’ve kept us waiting and unless you want a kicking you tell us where those photographs are”. Morecambe and Wise even had a cameo appearance. In fact the four series saw a parade of fine British acting talent, usually in the role of villains or temptresses, with the likes of Ian Hendry, Brian Blessed, Ronald Fraser, a young Ray Winstone, George Sewell, Geraldine James, Maureen Lipman, Patrick Mower, Alfred Marks and perhaps the queen of them all, a screen-dominating hilarious performance from Diana Dors as the mother of a petty thief who is far more monstrous than any heavy villain.

That the series was aces comes not just because of the central relationship, but because it also felt utterly authentic. From the street lingo, through the seedy snouts and informers that populated the underworld, the scene locations of West London, the bloodied noses after the punch-ups, through to the fact that the cops didn’t always get their man. About one in four of the crooks made off with the loot, for these cops were not incredible supermen like the Americans, but men with kipper ties and corduroy jackets. They drove drab brown Cortinas, not the Starsky and Hutch Gran Torino with a flashy white vector stripe. The writers had contacts with the police which meant they were able to feed into their scripts very contemporary issues of corruption and being too cosy with the criminals which afflicted the real life Flying Squad and eventually after a series of ‘supergrass’ prosecutions led to it being rolled back and absorbed into a serious crimes department. Several episodes see the police being investigated for corruption, or the reliance on personal relationships with some of the underworld ‘Faces’ in order to hunt down others even more menacing. Thus the Sweeney was original and cutting edge, unlike the fantasy element that attached to US cop dramas, (apart from “Cannon”, hard to fantasise about that guy). One episode dealt with Irish republican gun running.

In the mid 1970s I was 11 years old. I can’t honestly remember whether I watched “The Sweeney” from the outset, but I did tune in a good year before I was watching the likes of “Top of the Pops”. “The Sweeney” seemed like real life to me, the sights and sounds of the London I was growing up in were eminently recognisable, while the moral ambiguities the show probed accorded with my fledgling sense of awareness of how messy the world actually was. Oh yeah there was also the draw of sex, to someone on the cusp of puberty. Villain George Sewell pays for two prostitutes and one keeps her bra on while slipping out of her Playtex knickers (tastefully framed and inevitably ‘smudged’ at length by the police surveillance team, all the while Sewell’s crony is doing the real criminal activity elsewhere, yes this was one of the score one for the criminal episodes). Took me a lot of meditation on the mechanics of that one I can tell you. These days the shows, which are shown regularly on ITV4 and available online, offer me a different thing. London has changed beyond recognition in the last forty years, but “The Sweeney” preserves the London of the seventies and that now speaks to me, when all else is shifting and melting. The seventies cash-in films weren’t too bad, but the reboot movies this century have bugger all to do with the original series, Kalashnikovs instead of Webley revolvers, even though Ray Winstone completes the circle by metamorphosing from a young hood in the TV series, to Jack Regan himself in the movies.

“Nah, course I wasn’t scared. Mind you, some bugger peed in my pants”.

Now, shut it! and go watch the shows. You won’t be sorry.