Film - After the Storm 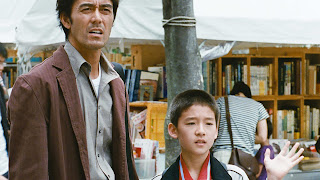 Does Ren Zelen get blown away as she watches After the Storm, in cinemas from 2nd June...

After the Storm, Japanese writer-director Kore-Eda Hirokazu’s latest feature, is again, a gently nuanced observation of human frailty and fallibility.

The film follows divorced dad and gambling addict Ryota (movingly played by Hiroshi Abe). We first see him sneaking into his mother’s tiny apartment and searching through the few possessions of his recently deceased father for anything he might be able to sell.

Unfortunately, Ryota’s Dad was also an inveterate gambler, and had already pawned anything of any worth. Ryota’s sweet, aging mother Yoshiko (veteran Japanese actress Kirin Kiki) and canny sister Chinatsu (Satomi Kobayashi) are also aware that Ryota has inherited his father’s weakness and have sold off the little his father left behind.

Trading on past glory as the award-winning author of a single novel, Ryota is now working as a private investigator, ostensibly doing ‘research’ for his next novel. However, he hasn’t published anything for 15 years. He supplements his income by running a scam with his young working partner, selling the compromising photos to husbands or wives caught in their infidelities, but immediately loses any money he earns in gambling, nurturing the foolish hope of gaining a ‘big win’ which will get him out of his financial trouble.

He is in arrears in paying child support to his exasperated, beautiful ex-wife Kyoko (Yôko Maki) for their son Shingo (Taiyo Yoshizawa) and frustratedly stalks her while she goes on dinner-dates with a financially successful new boyfriend.

The onset of a typhoon finds Ryota, Kyoko and their son Shingo holed up in his mother’s home overnight, and gives him a last-ditch chance to try and reconnect with the family he regrets losing.

Over the course of the stormy night the adults ask themselves many questions – most prominently, “Why did my life turn out like this?”. Ryota, we learn, wasn’t a particularly attentive father or husband before his marriage fell apart, only now, as he struggles to reconnect, does he realize the value of all he has lost.

“I wonder why it is that men can’t love the present,” his mother observes. “Either they just keep chasing whatever it is they’ve lost or they keep dreaming beyond their reach.” His father, she smiles sadly, was just like him. He never gave her the life he promised her. They never got out of the cramped, temporary flat and moved to the three-bedroom accommodation that she dreamed of, on the wealthier side of the housing development. He could never give up gambling long enough. Ryota sees himself in the same rut.

The theme here seems to be that we can’t easily escape the family traits we inherit, but if we don’t escape them we ruin our chances of having the life we want. When we see Ryota buy his son his first lottery ticket, we know he is just attempting to find a way back into his son’s life, but we can’t help but fear that he is also unwittingly transferring the gambling compulsion that ruined his and his father’s life.

A Hollywood film would introduce some major turnabout that would make Ryota suddenly reform his ways, but writer-director Kore-eda isn’t in the business of providing easy solutions. He prefers to explore the paradoxes of human behaviour and After the Storm proves to be the tale of a divorced man’s efforts to vainly reclaim a lost life with his wife and son. The emotional storm retreats only to reveal a sedate, realistic finale.

The subject matter may sound depressing, but the film is beautifully shot by regular cinematographer Yutaka Yamasaki, and offers a simple, yet emotive script and sensitive performances by all the actors. After the Storm is an observation of existence, where good-hearted, muddled, complex characters try to deal with lives that come apart, with no-one to blame but themselves. It plays between gentle comedy and the melancholy reality of how people actually behave.

The film also examines in microcosm, some of the social changes in modern Japan. It contrasts the women of the former generation, little educated and expected to accept all the possibly unpleasant aspects of married life - with modern, educated Japanese women – able to work to support themselves and no longer dependent or willing to live a married life of servitude or discontent. There is no shortage of divorce work at the private investigation bureau where Ryota has a job. The change has been relatively sudden, and the message here is also one of acceptance and understanding.

Back in 1998, Kore-Eda had his U.S. breakthrough with After Life. Since then, he has been a regular on the international festival circuit, building an impressively humanistic body of work offering subtle performances of acutely observed behaviour: Nobody Knows (2004) Still Walking (2008) Like Father, Like Son (2013) and last year’s Our Little Sister have all been critical successes. After the Storm might prove to be his most celebrated work yet.