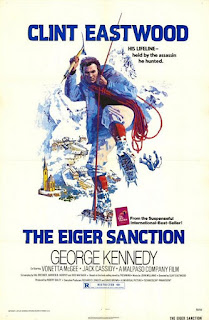 When the editor's away, Steve Taylor-Bryant comes out play. With our esteemed Susan away from the office, Steve has decided to celebrate Clint Eastwood's birthday. Every day. For the whole week. Here's the first of his favourite Clint films...


I have a somewhat obsession with mountain related things, considering my natural laziness and crippling fear of heights means I'll never climb one, and this one has assassin art professors and germ warfare. It all started as a kid, with my grandad showing films regardless of age suitability and one of the first I saw was the 1975 Eastwood directed, Eastwood starring The Eiger Sanction. Still a favourite of mine today and rewatched at least once a year.

You think it's so awful the other side has a germ formula? It's against the Geneva Convention, isn't it, and they stole it from us. Well what the hell are we doing with it in the first place? We're not supposed to have one either.

Jonathan Hemlock is an art history professor and collector who finances his hobby by performing the odd sanction (assassination) for an obscure government bureau. He is forced to take a case where he must find out which of the members of a mountain climbing team is the Russian killer he has been given as a target by joining an expedition to climb the treacherous Eiger.