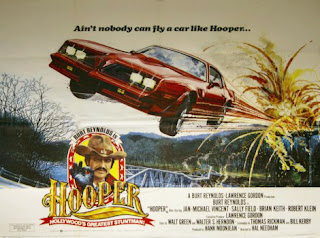 Without the aid of a safety-net, Steve Taylor-Bryant looks back at Hooper...

Whenever I need a pick me up, a couple of hours to myself to just unwind from whatever stress I've put myself under this time, I return to a period of years where an actor/director combination just set out to please people. Burt Reynolds, the actor in this combo, and Hal Needham, director, started work together in 1977 and produced this stunning array of hits together...

Six films that have kept me entertained for about 37 of my near 42 years on this planet. Each was funny, each was full of car chases, each has a place in my heart forever. Whilst it's Smokey and the Bandit or the first Cannonball film I return to most, they're just comfortable and easy to watch, it's Hooper I have the greatest of respect for.

As a young child I dreamt of being a stuntman, as an overweight older man that dream is still yet to be extinguished, and director Hal Needham had led the life my dreams were made of, he'd been the world’s highest paid stuntman (eat his broken bones and punctured lungs Colt Severs!) as well becoming an excellent filmmaker. His relationship with Reynolds was key to the level of success they shared in this period. It’s no surprise that any other project pales into insignificance when they weren’t working together. With Hooper though you get flawless perfection. You get Needham making a film pretty much autobiographically and eager Reynolds wanting to impress his friend and comment on their ageing in a modern Hollywood. The timeline within the story is successful due to its simplicity. Sonny Hooper, once the golden go-to stunt guy, is coming to terms with his age and the pain he is constantly in. He is very aware of the new generation coming through to replace him and, whilst he is a bit scared of being replaced, he can admire their preparation and planning. One such young buck is Ski (Jan Michael Vincent – Airwolf) who is coming in to work with Hooper on his latest film, especially when the climactic scene will feature a rocket car jumping over a 325 feet ravine due to a collapsed bridge.

That is pretty much the crux of the film, although the side story of Sonny Hooper and his girlfriend, Gwen Doyle (Sally Field – Smokey and the Bandit), is an interesting watch, and has a real life twist as Sally Field’s Step-father was Jock Mahoney, one of the greatest stuntmen that ever graced a film set, and adds perhaps a little emotional depth to a film about stunts, but it is the stunts that are the real appeal in Hooper. In our CGI filled world of modern films, a lot of stunt work is now done on wires in front of a green screen and that’s fine, I don’t mind, I do however miss the golden days of stunt work, the days before Health and Safety risk assessments where men (and women) full of bravado take a look at a building and can’t wait to fall off it. Hooper shows the stunt industry for what it is. It is excitement, it is egotistical, it is bravery, it is insurmountable risks, but it is also fragile. It is fragile on a health front, it is fragile on a survival front, and these egotistical and brave people are a lot more fragile in their hearts and minds than they wish you to know. As safety and technology have progressed and shrunken the role of the stuntman in modern days, so Hooper tells a similar tale, a story from every walk of life – When you’re old you will get replaced.

The comedic elements of Hooper are as good as other films. Reynolds just seems to have a natural chemistry with everyone. Jan Michael Vincent shows signs of the star he should have become and it’s sad watching back at how good he really is that he never really amounted to anything. The ancillary cast are all well placed, Sally Field her usual brilliance, Brian Keith and John Marley as Jocko and Max respectively are superb foils for Reynolds, and Robert Klein as the highly punchable director Roger Deal is just perfect. The likes of Adam West, still quite a huge star in his own right at the time, help make Hooper the perfect tribute to a lost art. The many men and women along the years that have been injured or worse with very little or no credit get their industry and their lives put up on the big screen in a way that a non-stunt fan can digest, for the rest of us we get to see an orgy of some of the greatest stunts ever committed to celluloid.