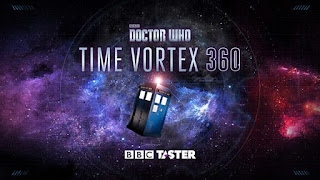 Doctor Who fans can now pilot the TARDIS using tablets or smartphones with a new arcade game...

Take the TARDIS on its most exhilarating journey yet as it careers through the depths of the space time vortex in the BBC’s first ever 360 arcade game, Doctor Who Time Vortex 360.

Fans simply need to visit bbc.in/dw360 using their smartphone or tablet and by physically moving their mobile device through 360 degrees, they will be able to fly the TARDIS within an increasingly turbulent time vortex.

As they speed through time, players will tackle hazards and obstacles emerging from the future ahead of them, but in a unique and literal twist will sometimes need to physically turn themselves to look backwards in time in order to evade threats emerging from the past.

Jo Pearce, creative director, BBC Digital Drama, says: “The beauty of this game is that you can use your mobile phone to fly the TARDIS wherever you are. Digital innovation is at the very heart of Doctor Who – this 360 degree game allows people to navigate the TARDIS through time and space like never before. We’ve seen a lot of innovation recently in the 360 and virtual reality space, but the majority has focused on experiential video-based experiences. This game, however, brings together the worlds of casual, arcade-style gaming and 360/VR to create a fun Doctor Who experience that people can easily pick up and play, wherever they are.”

The game is an endless runner, which gets more and more difficult the longer people play, taking them on a visually intense journey through the iconic vortex from the show's opening credits. Using the device's accelerometer, the game is controlled by physically moving around, even giving the player the ability to turn around and travel backwards in time.

Designed as a mobile-first experience for the BBC by Goodboy Digital, the game combines cutting edge HTML5 and WebGL using PixiJS v5.0 to create a breath-taking journey that works on a wide range of hardware.

The game is available to play on BBC Taster, where fans can rate the game and provide feedback.