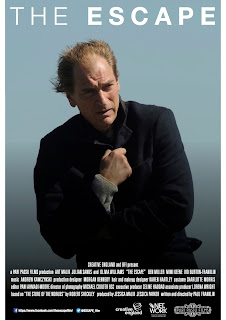 VentSpleen hides away from the real world and watches the short film The Escape, on recently at Tribeca Film Festival...

The opportunity of reviewing a short film which features Julian Sands and Art Malik wasn't something I was ever going to turn down. I have been a long term admirer of Sands' and Malik's considerable talent and they seem to find it impossible to turn in anything less than a masterly performance. Short films can also be a great 'shop window' for emerging film makers to show case their talents but they can also be a welcome treasure trove of cinematic brilliance. Pacing a short film represents a different challenge as too fast AND too slow can both cause issues with audiences with the end result being a lack of engagement or empathy. The Escape is a short written and directed by Paul Franklin and produced by Pari Pasu Films so my expectations were high with both cast and production set at a high standard.

An ordinary family man is offered the chance to live out his wildest fantasy, all he has to do is hand over everything he owns. What secrets are held in his heart and just what is it that we really dream about?

The feeling of life running away from us can be a terrifying one. No one wants to near the end of their brief tenure and feel they haven't been of use or made a difference. To find yourself in the nightmarish place of intense isolation and aching emptiness is something that rarely lasts for long and yet, in a world of increasing counter-community, we opt for a more self centred and driven existence. What would you do if there was a solution to this sapping void? What if you could experience, for one exquisite moment, a sense of fulfilment such as you had never felt before? Your life would have a purpose and you would be truly living, but the cost, the price would be everything. Would you pay it? 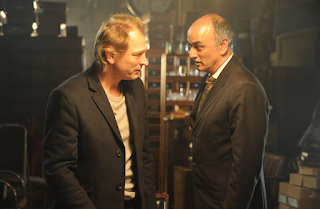 This is the choice that is offered to Lambert (Sands) by the mysterious Kellan (Malik) and understandably Lambert is having doubts. It seems Kellan has found a way to offer every man's heart's desire and, for the lost and the drifting, this is an offer impossible to refuse. Lambert is a family man, a business man but he is adrift from the very things that have given his life meaning. Sands portrays an everyman who could be me or you and is so instantly engaging that we sit alongside him as he agonises over his decision. This is an astounding achievement and is testament to Sands' astonishing talent but also Franklin's assured direction. Lambert is me, he is you, a man that once thought he knew what his life was about. He is a family man, a father, a lover, a husband. Yet... yet these things are not enough any more. His children are growing up and don't need him in the same way, the chasm that exists between him and his wife has not suddenly opened up, it has grown wider over many years. Lambert is lost in a sea of mediocrity and the pain of this existence is etched onto every line in his haggard face. The Escape is about escaping the beige and pointless life that fails to please or offer any release from the rat race. Felt like that? I have.

Kellan is a business man who is as desperate to reconnect or disconnect as Lambert is but he channels his frustration into seeking a solution. Little is revealed about his personal life and this adds the dark, mysterious element to The Escape. If the price is so high, who is collecting? Kellan seems to be merely a messenger for higher powers, but are they benign or sinister in intent. Almost apologetic in demanding the high price, Kellan has discovered a solution, a way to reinvest meaning to the meaningless. Sands and Malik compliment each other so well that the end result is of believable resonance. Kellan is not a bad man, he too is someone searching, desperately grasping for reality and for meaning, something more than the drab existence and his experimentation's, whilst not exactly legal, have a genuine sincerity about them.

The Escape is a character driven, power house of a short which poses more questions than it answers. The cinematography is astounding and yet never overwhelms the centrality of the story or premise. Short films can serve as both a powerful proof of concept for a full length feature and also an evocative stand alone. The Escape is both and I was left breathless and hungry for more. Inspired and yet questioning, remembering moments when my life seemed to drain of all purpose. The Escape is exactly what it promises in its title and I would welcome another visit.