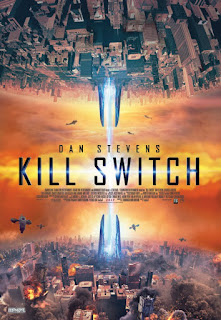 
Pilot and physicist Will Porter must race through an imploding world to get the Redivider box to a tower, which will save humanity, including his family, in the real world. after an experiment for unlimited energy involving parallel universes goes wrong.

Tim Smit directs Kill Switch, and no it's not a remake of the Steven Seagal film but an original script formerly titled Redivider, from a screenplay by Charlie Kindinger and Omid Nooshin. The film actually started life because of a short film, What's in the Box, which you can watch here (it's only 10 minutes) that Smit made for fun.

That went viral and Smit, Dutch physics student turned director/VFX aficionado (he did all the FX for his feature film himself at home) started to talk to producers in Hollywood and the rest, as they say, will be future history.

‘Yes, you will find out what’s in the box in the end’, Smit revealed this week. ‘The question is if you like it.’

The feature film stars Dan Stevens (Downton, Legion, Beauty and the Beast, Probably Everything Else This Year) Bérénice Marlohe (Skyfall, Twin Peaks) and Charity Wakefield (Doctor Who, Wolf Hall, Close To The Enemy) and Saban Films will release it in cinemas on June 16th.

In the meantime there's this trailer and a very enigmatic countdown going on over at the official film website http://www.presskillswitch.com/echo/