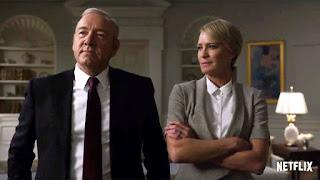 Watch the new trailer for House of Cards Season 5...

Frank Underwood (Kevin Spacey) is running for re-election with wife Claire (Robin Wright) now as his VP running mate, but they have some stiff competition in presidential nominee Will (Joel Kinnaman) and Hannah Conway (Dominique McElligott). All this at the same time as plotting a war against terrorist organisation ICO and trying to paper over the cracks in his personal relationships.

Season 5 is the first without US series creator Beau Willimon who hands over to existing showrunners Melissa James Gibson and Frank Pugliese to carry the saga forwards. And Melissa is careful not to make too many comparisons to the current US political situation. “Sure, the resonance sometimes feels eerie. But Trump is an outsider who’s trying to blow up the system, and Francis is the opposite.”

House of Cards returns, with all the new episodes arriving at once, on May 30th on Netflix.