Book - The Great Wall: The Art of the Film 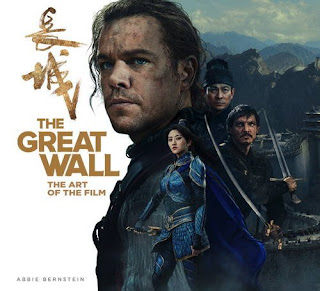 With The Great Wall now out on DVD, Susan Omand finally gets round to reading The Great Wall: The Art of the Film from Abbie Bernstein and Titan Books...

I will admit that it’s taken me quite a while to get round to reviewing The Great Wall: The Art of the Film but this is for one simple reason. It’s not because I haven’t seen the film or because I didn’t know the story (read my review of  Mark Morris' novelisation of the film here) but that I didn’t understand the way the art book was presented until now. Don’t get me wrong, the content is beautiful and well laid out, with a sumptuous gold edging to the pages. But as a complete book it looked, to me, unfinished and this really put me off. There is no spine covering, although the page edges where the spine should be are well finished with intricate stitching, there are random blank pages slid in at intervals throughout the book for no apparent reason and it felt, to someone used to the spectacular attention to detail that Titan Books are known for, that I had been sent a bit of a dud. It wasn’t until very recently, when I was researching China for a different project, that I discovered something incredible. This is actually how traditional Chinese bookbinding looks! Titan Books have gone above and beyond with their attention to detail on this one by copying the ancient oriental art almost perfectly – and it’s knowing about that one detail, that “oh, wow” moment, that made all the difference to my approach to the book. Which means, to me, that it’s one detail too many for the majority of readers to get, and errs on the side of being too clever.

That said though it is a gorgeous looking book, with a lot of behind the scenes and production photos and it makes a very interesting companion piece for the making of film, with tons of information about the production itself as well as the characters’ back stories and the legends that the film was based on. The book is split into sections, starting with interviews with the director and the producer before we get introduced to the characters, the army corps and the monsters involved. The rest of the book follows the events of the film chronologically, explaining how each scene was designed and shot, so it really does help to know the film and not mind any spoilers!

For me though, it’s not as “arty” as a lot of Titan’s Art Of books have been and that was a bit of a disappointment. There are far more production photos than drawings/concept pages and much more, albeit very informative, writing than I would have expected in an art book. If it was retitled as a Behind the Scenes or a Companion book and, sad to say it, more conventionally bound, it would hit the audience it deserves – fans of the film and of fantasy film-making in general.