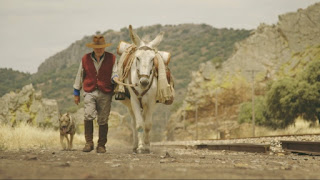 Susan Omand saddles up for the journey to watch the documentary Donkeyote at Edinburgh Film Festival...


“For my part, I travel not to go anywhere, but to go. I travel for travel's sake. The great affair is to move.”

The above quote is from Robert Louis Stevenson’s Travels with a Donkey in the Cévennes and, to me, perfectly sums up this lovely documentary which, I will admit, I chose to watch purely on the strength of its title, Donkeyote.

And there is indeed something Quixotic about the 76 year old Spaniard Manuel Molera Aparicio, who fills his time by walking in the countryside around his village with his constant companions, his dog Zafrana and his donkey, Gorrión. But Manolo, as he is known to family, still has a long-held dream to chase. He wants to take Gorrión to America so they can do one final trek together, the mammoth 2200 mile Trail of Tears, following the path of the Cherokee Indians as they were forced to leave their homelands and migrate from west to east across the Mississippi. Standing in his way are the obstacles of ill health, expense, travel logistics, language barriers and a donkey that doesn’t like being near water. The documentary follows his journey to overcome all of these things, be they giants or windmills, with his dream always remaining one more step away.

And it is all about the journey. The physical journey, yes, but also the emotional journey for Manolo and his family. What struck me was the wonderful support from his daughter who, far from saying an outright no to him, did express her concerns but encouraged him to follow his dream and find ways to get that step closer. And the steadfast refusal of Manolo himself to give up on his ideas and change plans before exhausting every option to try and achieve his goal, from recording video messages asking for funding, to taking English lessons to actually walking to Seville with his dog and his donkey to ask big companies for sponsorship and talk to shipping companies about how to get Gorrión over the ocean.

And the documentary is perfectly presented. The cinematography by Julian Schwanitz is stunning, with superb use of camera angles making the most of the beautiful scenery and the photogenic trio of man, dog and donkey. Their characters are incredibly compelling and the lack of voiceover narration or organised interview lets the story tell itself in a way that you really buy in to what Manolo is trying to do, to live his disappointments, suffer his frustrations and celebrate his minor triumphs with him, to walk beside him and his dog and his donkey on his journey to the journey and to will them on to both the next step and the final goal, even though you know in your heart of hearts that it may never happen. But there’s always that little voice in your head that says “yeah, but what if it does?”