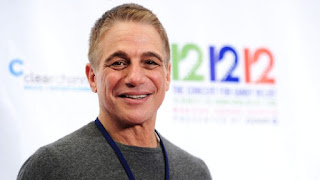 Netflix is bringing Tony Danza back to series television for viewers around the world in The Good Cop, a new 10-episode series from the creator of Monk...

In The Good Cop, Danza plays Tony Sr., a disgraced, former NYPD officer who never followed the rules. He lives with his son, Tony Jr., an earnest, obsessively honest NYPD detective who makes a point of always following the rules. This “odd couple” become unofficial partners as Tony Sr. offers his overly-cautious son blunt, street-wise advice on everything from handling suspects to handling women.

“We’re excited to bring viewers the return of Tony Danza, one of television’s most beloved icons,” said Cindy Holland, Vice President, Original Content for Netflix. “The Good Cop is a funny, charming procedural series that we think our members will love.”

Said Breckman, “Many cop shows feature dark and provocative material: psycho-sexual killers, twisted, grim, flawed detectives. Many address the most controversial issues of the day. I watch a lot of them. God bless 'em all. But the show I want to produce is playful, family-friendly, and a celebration of old-fashioned puzzle-solving.”

Tony Danza became a household name while co-starring in the classic sitcom Taxi, which ran from 1978-1983. Danza then cemented his place in TV history with his starring role in Who’s the Boss, which ran from 1984-1992 and was a global phenomenon. The show went on to be one of the biggest successes in syndication history.

Danza most recently starred in the critically acclaimed Broadway musical comedy “Honeymoon in Vegas,” for which he received rave reviews, with The New York Timescalling his performance “A career high… sly genius” and drawing comparisons to Frank Sinatra. Danza also recently co-starred on the big screen in the indie hit Don Jon, in which he played Joseph Gordon-Levitt’s father and received critical acclaim. Among his past successes, Tony has starred on Broadway in the The Producers, A View from the Bridge, and opposite Kevin Spacey in The Iceman Cometh, and starred in beloved films such as Angels in the Outfield, She’s Out of Control, and Hollywood Knights.

Tony lives in New York, where he has a special real life connection to the NYPD as a member of the board of directors for the NYPD Police Athletic League and is an active champion of their Teen Acting Program.