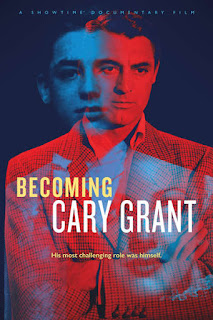 Cary Grant is, was, and always will be, a Hollywood legend. His films, like North by North West and Bringing Up Baby, are famous all over the world and his on screen persona charmed everyone. But what about the man behind the mask? Throughout his life, off-screen Grant was a highly private individual and this documentary set out to fill in some of the blanks, with clips, interviews and unprecedented access to the actor’s own film footage. Unlike a normal biographical documentary though, many of the words are Grant’s own, taken from his hitherto unpublished autobiography, giving a real insight into what “becoming Cary Grant” was like from his own point of view.

The film was presented using a particular episode in Grant’s life as a lynch-pin from which to hang the rest of the stories. In the late 1950’s, and with a huge back catalogue of films, Cary Grant had an existential crisis and went into therapy at the suggestion of his then wife Betsy Drake. Doctor Hartman prescribed a series of psychotherapy treatments using LSD, to allow Grant to revisit and deal with his suppressed memories, and it is via a reconstruction of one of these five hour sessions that we as the viewer get to see his life to that point. We get flashbacks to his childhood, as Archibald Alec Leach in Bristol, England, with family photos and sombre memories from his autobiography as he (voiced by the eminent Jonathan Pryce) tells of his mother leaving suddenly and his father starting a new life with a new wife and family, shunting Archie off to live with grandparents. That could have been the end of the story but a visit backstage to the Bristol Hippodrome changed everything. Fourteen year old Archie joined the Pender Acrobatic Troupe and found a new family. When the troupe went to New York for a job, so did he, deciding to stay on there when the run came to an end as Broadway beckoned. From Broadway, where he was reviewed as being “too handsome but he can’t sing,” Archie moved to Hollywood and changed his name to Cary Grant as “nobody would pay to see Archibald Leach.”

His first few films saw him work for Paramount, as the handsome eye-candy for their strong leading ladies such as Mae West, and it wasn’t really until Sylvia Scarlett, a film he starred in with Katherine Hepburn, that he became more recognised as a character actor and his career really took off when he became an independent actor, not tied to any one studio. It was also around this time that he discovered that his mother hadn’t left him of her own accord but had been committed to a mental institution by his father all those years ago. So it was timely advice when Leo McCarey, director of An Affair to Remember, highlighted the importance of creating an on-screen persona and “becoming Cary Grant” gave Grant the mask he needed to hide behind.

The documentary goes on chronologically charting on-screen acting successes and off-screen relationship failures until we reach the point at which we came in, with the conclusion of the LSD treatment session which Grant says in his autobiography changed his life. “After weeks of treatment came a day when I saw the light. When I broke through, I felt an immeasurably beneficial cleansing of so many needless fears and guilts. I lost all the tension that I’d been crippling myself with. First I thought of all those wasted years. Second, I said, ‘Oh my God, the humanity. Please come in.’”

For fans of Cary Grant this is a must-watch, as I was surprised at how much information I got from this documentary. It conveys the stories behind the headlines in a way that manages to be fascinating without being sensationalist. Using the words from his autobiography also helps to find that delicate balance between glorifying Grant and portraying him as a victim of his own success. There are still many gaps in his life and career to fill though and, I’m sure, some never will be but, with Becoming Cary Grant, you come out of the film at the end like emerging from an LSD trip, with a newfound clarity and a deeper understanding of the man himself.