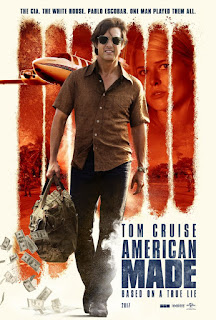 Guns. Drugs. Money laundering. And the CIA. Based on a true story, watch the trailer for American Made...

With The Mummy about to open in cinemas worldwide this weekend, MI:6 filming and Top Gun 2 in pre-production, let's look at the next Tom Cruise movie to actually hit our screens. And this one lets us see his acting range as the "character film" Cruise rather than the "all-action hero" Cruise - think Born On the Fourth of July, Valkyrie, Magnolia or even Jerry Maguire, Tom Cruise can do a whole lot more than just be Tom Cruise in films.

In Universal Pictures’ American Made, he reunites with his Edge of Tomorrow director, Doug Liman (The Bourne Identity, Mr. and Mrs. Smith), in this international escapade based on the outrageous (and very real) exploits of hustler and pilot Barry Seal, who is unexpectedly recruited by the CIA to run one of the biggest covert operations in U.S. history.