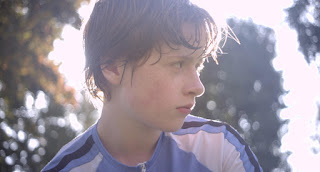 Susan Omand reflects on the weight of expectations as she watches the short film Boys...

A friendship between two adolescent boys takes several abrupt turns one night, as the pair push boundaries and discover a new side of themselves.

You know that I’m a fan of short films – I see them as perfect encapsulations of the artistry of film-making distilled to its essence. After reading the above synopsis of Boys, I was intrigued enough to go looking for the trailer and I was captivated by it (watch it below), the piano music and ominous captions that served to build atmosphere, the absolutely gorgeous cinematography and the cliff-hanger feel of those stars on the ceiling and that spoken statement “I’m afraid of the dark.” It all boded well for a short film that was going to blow me away as I settled to watch the whole.

Boys is a beautiful looking film that, for me, misses its purpose. The cinematography by Darrell Brett is, indeed, stunning and his use of light gives that real “summer” feel to Boys. I also can’t fault the performance of the boys themselves, Wyatt Griswald and Pearce Joza. Well cast, they had a definite bond, if not a chemistry, and were believable as friends as they played and laughed together in the summer sunshine. But I feel I must have missed something as the promises of a good story to the film, given by both the synopsis and the trailer, failed to materialise for me in the writing and direction of Eyal Resh. I was expecting, if not something dramatic and suspense-filled, at least something of consequence, something that hinted that there was more at play here, that there was some kind of motive. But none of that was delivered. There are no abrupt turns, no boundaries pushed and nothing to suggest any change of their relationship in the future. As a story, for me at least, it got to a brink and then didn’t take the leap into saying anything meaningful.

I guess I was just expecting too much from the set-up. Taking it for what it is then, it is a lovely study of adolescent friendship and the usual things kids get up to – prank phone-calls, taking the mickey out of each other, caring about each other and just... well, being friends. And it IS a beautiful looking film, I'm just disappointed it wasn't anything more.