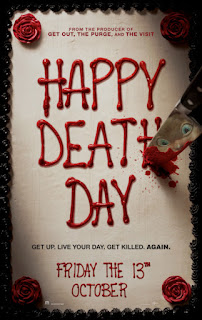 Blumhouse produces an original and inventive rewinding thriller ("original and inventive" that is unless you've watched all the other rewinding films - like Edge of Tomorrow, Source Code, Groundhog Day, Deja Vu, Repeaters, Looper, Predestination, 12 Monkeys, The Butterfly Effect, Deja Vu...) in Happy Death Day, in which a college student (Jessica Rothe) relives the day of her murder with both its unexceptional details and terrifying end until she discovers her killer’s identity.

Happy Death Day is directed by Christopher Landon (Paranormal Activity: The Marked Ones) and written by Scott Lobdell and Landon and hits cinemas on Friday 13th October (coincidentally the same date used for the fake loop in the film 50 First Dates allegedly, it's like they planned it isn't it?).

Anyway, watch the trailer. Just the once though.