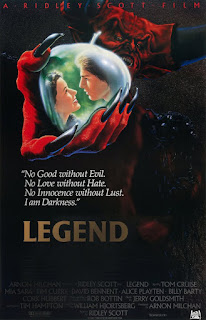 Our small band of Gunters here in The DreamCage universe are reviewing every film mentioned in Ernest Cline's Ready Player One. This week , the legend that is Steve Taylor-Bryant takes on Legend...


A magical adventure which features elves, demons and other mythical creatures. Darkness, the personification of evil, plans to disperse eternal night in the land where this story takes place, by killing every unicorn in the world. Although he looks unbeatable, Jack and his friends are disposed to do everything to save the world and princess Lili (who Darkness intends to make his wife) from the hands of this evil monster.

Legend is a film that just doesn’t work for me. I am on record stating that Tom Cruise has never been bad in a film, not that he hasn’t been in bad films, and he's not terrible in Legend, he's just, I don’t know, too young? Too pretty? Not quite ready for the step up from the likes of Risky Business to the sprawling sets and effects of a huge Ridley Scott film? Cruise as Jack doesn’t do a bad job but just looks lost throughout and I sort of feel sorry for him, as I got pretty lost during Legend as well. What should have been an epic piece of fantasy from a director riding high on success was a dark mess. For a story that felt steeped in the kind of fairy tales we read as young children it seemed to focus on the darkness and the evil more than it should. Yes, fairy tales are dark tales, I know that now, but as children we receive our fantasy in manageable, more friendly chunks and, whilst I can watch Legend back now as an adult and see what they were trying to do, at the time (1985) I was 10 and its target audience. There is no light in the production, it is too dark, too gloomy and, with your heroic lead looking lost throughout the entire film your villain, your darkness had better be spot on to make it work, so step forward Tim Curry. Tim Curry? Are you sure?

I like Tim Curry a lot, his entire back catalogue is pretty much sheer grinning brilliance where you are essentially watching Tim Curry be Tim Curry. If you don’t want Tim Curry to be Tim Curry then hire someone else. Unfortunately Scott didn’t hire someone else and took Tim Curry and made him unrecognisable, which essentially wastes Curry’s talent. This actually makes me quite angry. I have a big problem with Ridley Scott films for these kind of reasons. I love Tony Scott films because he takes his cast and produces a couple of hours of great character stories, Ridley takes his cast and makes them stand about in something pretty. Don’t get me wrong, for 1985 the effects and sets for Legend were phenomenal and Ridley Scott rarely gets the ‘look’ of something wrong, but I want to get to the end of a film and feel like I've enjoyed a story rather than just seen cutting edge effects. Some of my favourite films ever have poor effects, very little CGI, but they all have characters, actors that raise their game in pursuit of something great. A Ridley Scott film is the opposite, it looks stunning but contains very little. Tim Curry went on to make bigger and better roles his own, I think its safe to say that Tom Cruise did alright for himself, mainly because of a Tony Scott film the following year (just saying), and Mia Sara, whilst not maybe the huge star she could have become, had a pretty great career. Ridley Scott continues to get hired to make pretty things like a rogue plastic surgeon, but fantasy films for children suffered with Legend. What should have been one of the best films ever made wasn’t even as good as Willow. In fact go and watch Willow.