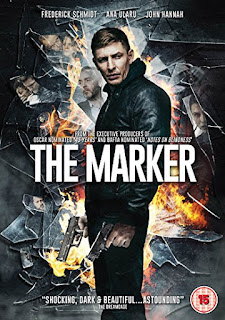 Susan Omand's pick for "Film of the Edinburgh Film Festival" is out on DVD on Monday, a reminder of her review of with The Marker...

I’m going to run out of superlatives soon so I’d better start explaining why Justin Edgar's film has, for me, become the film of the Edinburgh Film Festival.

The Marker follows career criminal Marley Jacobs (Frederick Schmidt), imprisoned for the manslaughter of a woman as collateral of a gangland crime. But the prison is not just physical as he is haunted by his crime in the manifestation of the ghost of his victim (Ana Ularu). On his release, he sets out to try and find the woman’s daughter, who he knows witnessed the killing, with the woman’s ghost ever present in his life. His mission to make amends brings him up against his former gang boss (John Hannah) as he faces his own demons as well as the bleak, uncaring, tit for tat workings of the seedy underbelly of Birmingham’s organised crime scene. 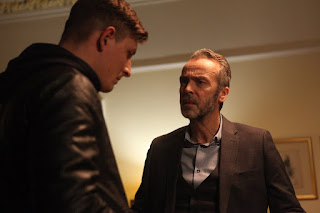 The story had me hooked from the start. I’m a huge fan of gangland films anyway but what a fantastic premise to have the victim’s ghost always there in Marley’s line of sight, sometimes interacting but seldom speaking, as a visible invisible reminder of what needs to be made right. And no, the Dickensian twist, whether intentional or not, was not lost on me that she was Marley Jacobs’ ghost. The rest of the narrative hit the right tone for a gangland film because it really didn’t romanticise or glorify the lifestyle, in the way that some genre films can, instead presenting the reality of having to live within the rules, the confines of consequence and the thought that loyalty doesn’t beget loyalty, at any moment you can be turned on by those you trust. And this callousness is wonderfully portrayed by John Hannah who, for once, gets to play the bad guy and is frighteningly convincing in his execution of the gangland boss role, if not in his Irish accent but that is easily forgiven. Ana Ularu is also really impressive as the “ghost” managing to maintain that “one step away” other-worldliness in her demeanour, even when emotions are running high. She also uses her strikingly beautiful glare to full and haunting effect, never playing the victim but instead wielding a sense of power over Marley. But it is to Marley himself, Frederick Schmidt that the majority of acting plaudits must go. He plays the tortured soul to perfection while still, in an instant, shutting off his emotional anguish to become the cold, hard, calculating killer when needed. They say revenge is a dish best served cold and Marley’s revenge is as cold as it comes.

But it’s not just the story and the characters that make this film stand head and shoulders above the rest. The cinematography and sound design are astounding. The colours, the use of neon glow, the washed out housing estates, all serve to build an environment that feels bleak, almost foreboding, and highly dangerous. And the use of silence is incredibly effective in adding to that chill, especially in some of the chases and gunbattles.

If you get the chance, you have to watch this film and prepare to come out of it stunned, exhausted, fearful and yet captivated by a brilliant ensemble piece.