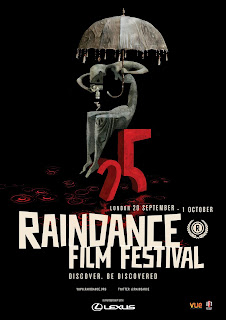 The Raindance Film Festival is quickly approaching and to celebrate, it has launched the Official Trailer & Poster for its 25th edition, in London’s West End from September 20th – October 1st...


A champion of independent cinema around the world, the Raindance Film Festival is the largest of its kind in Europe. It showcases feature, documentary and short films, music videos, web series and virtual reality experiences. Known for providing an international launch platform for independent films, Raindance hosted the UK and world premieres of such cult hits as Pulp Fiction (dir. Quentin Tarantino), Memento (dir. Christopher Nolan) and Down Terrace (dir. Ben Wheatley). Last year’s big Festival winner – The Shepherd (dir. Jonathan Cenzual Burley) was released in UK cinemas earlier this year by Matchbox Films and winner of last year’s award for Best Documentary, Growing Up Coy (dir. Eric Juhola) was released by Netflix in January.

Internationally renowned illustrator and filmmaker, Dave McKean (MirrorMask, Luna) illustrated this year’s eclectic poster. McKean is no stranger to Raindance, having previously illustrated six Festival posters between 1997-2002. He also wrote and directed the trailer for the 8th edition of the Festival. The poster was designed by creative design agency What is Bobo, who this year have designed all the materials for the Festival.

Fostering an environment of creativity and inspiration for emerging and established filmmakers, the Festival also offers opportunities for industry collaboration through its co-production and industry days forums.

Directed by Rick Darge, the inspiration behind this year’s trailer has been attributed to the filmmaking process and the deconstruction of cinema – taking a comedic look at the dichotomy between fiction and reality. Darge won the Film of the Festival Award at last year’s Festival for his feature debut, Zen Dog.


The programme for the 25th Raindance Film Festival will be announced on Tuesday, August 15th, 2017.
Image - Raindance
Email ThisBlogThis!Share to TwitterShare to Facebook