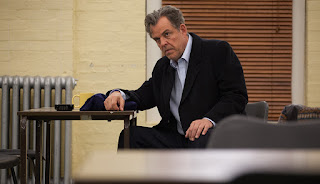 Things get personal for Susan Omand as she watched The Last Photograph at Edinburgh Film Festival (with spoilers) ...

Being a director with the surname of Huston must be an awful lot to live up to sometimes but, with The Last Photograph, Danny Huston, son of the late great John Huston, acquits himself very well.

Huston directs as well as stars in the film, which deals with a man who is distraught when he loses his most cherished possession, a photograph of himself with his teenage son, when his bag is stolen. This leads him on a physical and emotional journey as he processes his loss both now and in the past.

Now I’m going to put up a spoiler warning at this point because there’s things I need to talk about in the plot of the film which made it a very hard watch for me, but this difficulty should be taken as a huge compliment to all involved.

Firstly, I hadn’t read the press pack for the film, just the brief EIFF synopsis, so I only found out part way through the film that the “incident in Scotland” that the synopsis refers to, and where it turns out his son was killed, was the horrifying crash in Lockerbie of Pan-Am Flight 103. I remember this happening for real and I knew people who were directly affected by it so rewatching the harrowing ITN footage of the crash aftermath, of seeing again Malcolm Rifkind, the then Scottish Secretary, standing before the press the morning after the crash, ashen faced and in shock, brought it all back to me and moved me to tears. Using the real news archive footage in this film was a master stroke as that kind of effect, that emotional connection with what the father was actually experiencing, could never have been achieved with either a fictional tragedy or skirting round the details of the real one – we HAD to physically experience it all over again in the same way as we had originally.

It was also an incredibly emotional watch for me for a much more personal reason, as I totally understood that gut wrenching horror of losing “the thing” that kept me tied to a loved one who had died suddenly. It is a feeling that makes you sick to your stomach and, at the time it happened to me, I howled, physically howled, with grief for a day and a night at the loss of the thing and then at the loss of the person but, like the distraught father, that was the catharsis that was needed, that broke the dam of everything that I had been holding back and helped me to move on from a very difficult time and start to process what had happened. So his grief process brought me to tears again as I remembered those feelings.

Like I said above though, both of these things are huge compliments to both the acting and the directing of this film. It feels real to the viewer because it IS real and is superbly and viscerally portrayed by Huston. That reality is also helped by the non linear way the film is composed, flitting from the present to the past as memories are sporadically recalled while the father recounts the story to his work colleague. As an aside, that’s another really interesting aspect of the grief process that this film artfully brings to the fore – very often it’s not someone close to you that you end up opening up to and offloading to, so it being a concerned work colleague who has noticed “something wrong” and just asks the question and “is there” is a good observation.

If I have a complaint at all it is that the film should have maybe ended a scene or two before it did as the meeting with Bird, the son’s American girlfriend and the reason he was on the plane at the time, was a bit sugary. That spoiled the mood for me a bit when it could have been left either at the “did they meet” stage or at the point that she turned up. But, to be honest, by that time, I was so emotionally exhausted from experiencing the rest of the film that the lighter ending didn’t really matter.