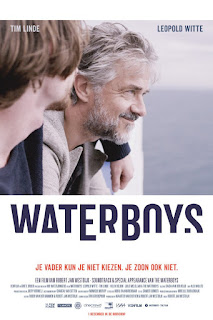 Susan Omand looks for the whole of the moon as she watches Waterboys...

Yes, those Waterboys. The band really does have a large part to play in this gentle Dutch comedy, not least because their music, from way back to modern work, provides the soundtrack.

The story centres around a womanising Dutch crime writer who comes home after one too many “nights away” to discover that all his belongings have been moved into storage and there’s a note from his wife saying she wants him out of the house before she gets back from work. He moves into a hotel for the night, where he gets a phonecall from his publicist to say that he’s still expected to go on a trip to Edinburgh to publicise the translation of his new book. He also gets a call from his son who has broken up with his own girlfriend and wanted to sleep in his old room but he can’t get into the house as his mother has changed the locks. Cue a road/buddy movie as father, son and (randomly) son’s cello head for Scotland on a trip that will change their relationships with each other and with the world.

The story, it has to be said, is nice but predictable and that lack of depth, for me, is what lets this film down although I totally get that others would enjoy the tale. What I did enjoy were the two main characters, the author father Victor, played by Leopold Witte, and his son Zack, played by Tim Linde, who were believable as dysfunctional family trying to get along on this implausibly awkward trip. It’s just a pity that the rest of the supporting characters felt very stereotyped, from the mean antagonistic publicist who eventually mellows to the “eccentric landed gentry” styling of the man funding the book translation.

The other two things that really make the film worth watching though are the wonderful touristy showcasing of Edinburgh and the magnificent music of Mike Scott and The Waterboys, both used to very good effect throughout to provide both stunning backdrop and plot devices, although I do hope people don’t go to the King’s Theatre in Edinburgh expecting the inside to look like the concert venue in the film, as that bit was shot in Amsterdam – I did a bit of research purely out of curiosity.

Waterboys is indeed a “nice” film to pass an afternoon but don’t expect anything earth-shattering. If it was a novel, it would be that light holiday read, pleasant enough even though you can see the plot coming a mile off so you’d not bother taking it back home with you to read again.