The Defective Inspector flips the sign on the door to open and writes his report on Shoppe Keep...

It’s against my better nature to be cruel to indie developers, if anything I can be overly kind, as I believe indie is becoming a necessity to almost all forms of media these days. While this is the case I cannot help but feel like being different sometimes gives you a level of immunity not granted to larger corporations. I know I am guilty of that as I feel burdened with the inability to speak ill of the little guy. Then I played this game and… well, I am sorry to say this article will disprove that theory. Brace thy self.

Shoppe Keep is one of those conceptual games which seem so magnificent at first that you can’t help but hope for the best. You are a shop owner who, through clever business practices, must build up an economical foothold in a poor provincial town where even 6 eggs are too expensive. You can customise just about everything: the placement of the shop items, the champions in your employ, the prices, the skills, the loot, just name it and you can probably do something to it. So why was I so negative earlier? Well it doesn’t pan out as beautifully as I’d like. 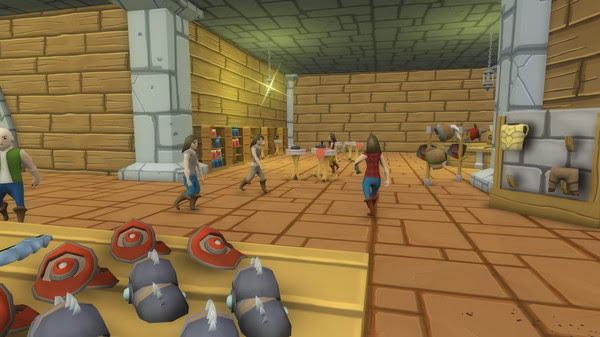 When starting the game I am met with no real guidance, which you can see very clearly in the Let’s Play video I did only a few days ago. You get some tutorials to read through but truthfully, they are not a massive help. Through a degree of fumbling and a bit of anger I worked out some basic mechanics and it became clear that getting to a workable shop was going to take some time and effort to even become a moderately successful entrepreneur. I setup a few benches (which might be needed? I dunno…) ordered a potion or 2 and then waited for people to enter the shop. The bitter sweet smack of economics became clear as the game automatically set my price to cost of the item and when a thief stole one potion I didn’t even break even. I’ll admit I felt stupid for not really looking into it before playing but hey ho, live and learn. Truthfully I would of rather been given a few “starter items” to get me going and act as a buffer to my own stupidity, but I survived with enough cash to purchase MORE potions and… Then wait… Then buy more… Then wait… It suddenly became very clear how much waiting was involved.

This was my prime issue, the pace. Even if I get past the unforgiving start and ridiculous names like “John Butthead” there was no getting past how slowly time passed in this tiny town. This eventually lead me to a murderous rampage on the Let’s Play video so I decided I needed to spend more time on the game by starting fresh without the camera rolling. It just got worse, while I knew I had to watch for thieves and raise prices the pace didn’t change, I still had to watch people crawl through the streets and eventually buy items from the shop. I don’t know what I was expecting as the core game didn’t change just because I hit the reset button. The names were still childish, the graphics were still laughable and… That’s it. After 2 hours I was done, willing to do real life chores like gardening or washing dishes than tolerate another moment of Shoppe Keep. Desperate to know if the game improves past the point of monotony I decided to see if there are others who enjoyed it more than I did and perhaps found things I did not, luckily the internet did not disappoint. A champion to go and obtain loot for me, some sort of grinding process where I make items from base materials, more space to build the shop, it all seemed very promising. Problem was the whole game seemed promising and… Well fool me once, y’know? But it got worse…. 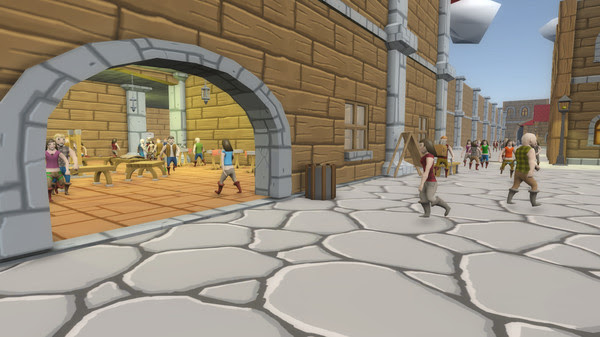 Apparently there are bugs relating to skill trees which have not been fixed, I dared to look at the update log and appears that the last update was November 2016, six months after official release, and one hotfix patch during Christmas time. Then the ultimate kick in the teeth was discovered, a new game with similar concepts and designs was release in April 2017 by the same guy, even worse it was VR based! If ever there was an example of someone spitting in the face of a loyal group of supporters, it was this. Entertaining the idea that Shoppe Keep is just “not my game” it won’t change the fact the creator/developer has run off elsewhere to make money with a similar concept. Just… Wow. In Bird culture that is considered a dick move.

I want to discuss a redeeming feature and apart from allowing me to make a Rick and Morty reference, I can’t find one. The graphics are comically bad, the pace is golden syrup level of slow and the developer abandoned an unfinished product. While the initial idea could have been something beautiful this is wasted potential and I weep for anyone who backed this during the crowdfunding/alpha stage.