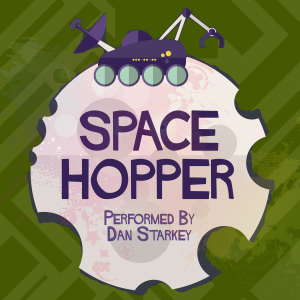 Getting pulled in to the flux of the space-time continuum, Susan Omand listens to Space Hopper by Neil Gardner, thanks to SpokenWorld...

“Newness is the rarest discovery”

It’s well known that I’m a convert to audiobooks and we have listened to and reviewed many of Spokenworld Audio's offerings over the years, including several written by Neil Gardner. It’s also fairly well known that FREE is one of my favourite prices for things, so when Spokenworld added a new freebie short story to their catalogue, of course I was going to give it a go.

Described as “speculative existentialist science fiction,” the story follows the mysterious eponymous space hopper as it skips from one location to the next, repeatedly visiting new places but never getting to stay for long. Neil Gardner’s use of language augments this repetitiveness using recurring phrases and alliteration to great effect. And the voice of Doctor Who alumnus Dan Starkey was a brilliant choice because he played the part delightfully, imbuing the character with both world weary expressiveness and sarcastic excitement at each new “bounce.” As the story goes on, the weary acceptance turns to creative questioning and it is only in the last two minutes that we, the listener, get a third person viewpoint explanation for this behaviour but, as with all observatory analysis, the tangible reasons never give the whole picture and the hopper’s character retains a depth that has now been wonderfully rounded out.

This speculative existentialism is a style of writing that I think Neil is incredibly good at and I could go on and on about the deeper meaning and analysis of this story but it would only be personal opinion because I think each listener will take something different from it. However I must mention the sound design as it is incredibly well done, from the apt composition of music which underpins the majority of the narration as well as providing the main theme, to the beautiful use of echo/reverb in places, adding a sense of vastness without ever overwhelming the narration.

If you’ve never tried the psychological side of sci fi before, Neil Gardner’s stories are a very good place to start, as I find they open doors to trains of thought you may not otherwise have considered. And if you’ve never tried audiobooks before, these free short stories from Spokenworld Audio are your perfect excuse to give them a go.