Audiobook - Be Pure! Be Vigilant! Behave! 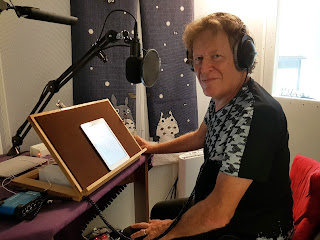 Our friends at Spokenworld Audio have announced a new partnership with legendary comics writer Pat Mills and his recently launched Millsverse publishing enterprise....

The creative team-up’s first project is to produce and release an audiobook edition of Pat’s latest title “Be Pure! Be Vigilant! Behave! 2000AD & Judge Dredd: The Secret History”, narrated by Pat Mills himself.

As 2000AD and Judge Dredd celebrates its 40th birthday, Pat has, at last, written the definitive history of the Galaxy’s Greatest Comic, and the turbulent, extraordinary and exciting events that shaped it. Be Pure! Be Vigilant!Behave! is the infamous slogan of Torquemada, the comic’s favourite villain. It once appeared on the Berlin Wall, and symbolizes the subversive nature of 2000AD that changed so many readers’ lives and influenced generations of film directors, actors, rock bands, novelists and even school headmasters. Everything you’ve always wanted to know about Judge Dredd, Slaine, Nemesis, ABC Warriors, Flesh, Bill Savage and more, is in this book. Plus the writers and artists who created them and the real-life people and events they drew on for inspiration. The scandals, the backstabbing, and the shocking story that was regarded as “too sensitive” to ever see the light of day is finally told. Pat relates the dark story of the maths teacher who inspired his version of Judge Dredd, the creators’ angry battles with the censors and each other, why certain writers, stories and even readers have been banished from the comic, a step-by-step account of how Judge Dredd was created, and how to write or draw for 2000AD today.


“This is an opportunity of a lifetime,” says Neil Gardner, owner and MD of Spokenworld Audio. “I’ve known Pat for 7 years, thanks to our mutual friend (and audio genius) Dirk Maggs, and I’ve wanted to get an audio project going with him for all that time. Of course, I’ve been a fan since the 70s, of his incredible 2000AD work, but especially Charley’s War and other Battle series. The chance to bring Pat’s impressive and authoritative tome to audio life was one I wasn’t going to miss…and having Pat himself read the book will be something all his fans will find absolutely riveting.”

Pat added that he was “So thrilled to be doing the audiobook version of Be Pure! with Neil. You’ll hear the passion that I feel for 2000AD, Judge Dredd, Slaine, Nemesis and all the other great characters. And I’ll finally have to get my pronunciation right on Slaine.”

The title has been recorded at Spokenworld Audio’s parent company studios, Ladbroke Audio, in Croydon and the audiobook will be released as a download-to-own digital release exclusively via the Spokenworld Audio website on 1st August, with releases on Audible, iTunes and other platforms in September.

“This is our first collaboration,” says Neil Gardner, “and a solid basis for what I hope will be many years of partnership in the audio realm. There’s so much creativity and knowledge with Pat and it will be an absolute pleasure to see how we can translate that into audio productions.”

Pat Mills created 2000AD–featuring Judge Dredd–which celebrates its 40th Birthday in 2017. He also created the girls’ mystery comic Misty, now enjoying new success in collected editions. He was the key writer on Crisis with his political thriller, Third World War. Some of his well-loved and long-running British co-creations are Charley’s War, Slaine and ABC Warriors. He has written Judge Dredd, Doctor Who audio plays and comics, Dan Dare, and stories for Marvel and DC Comics. His Marshal Law–co-created with Kevin O’Neill–was published by DC Comics as a deluxe graphic novel collection and is a New York Times Best Seller. His crime series Accident Man is now published by Titan. He continues to write all manner of challenging stories today, including his graphic novel series Requiem: Vampire Knight, now up to volume eleven and a bestseller in France.

Find out more about Pat, the audiobook and so much more by watching the Q & A below, kindly recorded at the Ladbroke Audio studios

The audiobook is available from 1st August direct from Spokenworld at http://spokenworldaudio.biz/product/be-pure/

And you can get the paperback and Kindle from Amazon at