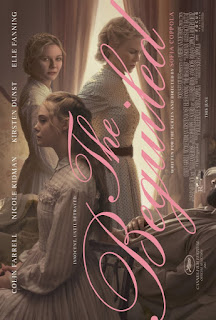 Now out on DVD, was Ren Zelen seduced by the charms of The Beguiled...

I remember watching the original 1971 Don Siegel/Clint Eastwood version of The Beguiled on late-night TV while myself at a rather impressionable age, and being drawn into its sweaty, sinister Southern Gothic atmosphere of lurid emotion, (and who could out-do Geraldine Page in the lurid emotion stakes?) It reeked of repressed and vaguely deviant sexuality and opened with Clint Eastwood’s character planting a kiss on the lips of the surprised 12-year-old girl who rescues him.

Sophia Coppola’s version of The Beguiled eschews the less palatable sexual overtones and cools down the hothouse histrionics. Her school is not portrayed as a prison of sexually-frustrated vixens, but rather a place where lively girls are isolated, constrained and rigidly bored.

Her film is transplanted to Virginia and is graced by images of stately Southern mansions, moss-draped trees and wildly overrun rose gardens. Coppola, (who also wrote the script) sticks closely to the basic story of the 1971 version (and Thomas P. Cullinan’s 1966 novel A Painted Devil), but her characters behave more rationally, at least for a while.

The story begins 3 years after the secession, when 11-year-old Amy (Oona Laurence), is out gathering mushrooms in the Virginia woods. She stumbles upon an enemy Union soldier with a severely wounded leg, Corporal John McBurney (Colin Farrell). Being a kind-hearted, Christian child, Amy helps him limp back to the sprawling house that is the girls’ seminary in which she resides, and summons its headmistress - the coolly-collected Miss Martha Farnsworth (Nicole Kidman).

Most of the seminary’s students have gone home because of the war, but 5 girls remain, stranded by the danger of returning to their own war-torn hometowns across the South. The oldest of these girls is Alicia (Elle Fanning), bored to tears by dull routine and eager for flirtation and seduction. Apart from the headmistress, one teacher also remains, Edwina Morrow (Kirsten Dunst) all quiet despair and resignation.

The residents first consider turning Cpl. McBurney over to soldiers — either his own or theirs — but appealing to ‘Christian charity’ they vote to first bring him inside and tend to his wounded leg, lest he bleed-out and die.

Although they are Initially fearful of an enemy soldier, relations between McBurney and the women quickly improve. He addresses all with chivalrous Irish blarney - particularly the matter-of-fact Miss Martha, the quietly dutiful Edwina, and the precociously flirtatious Alicia - who decides to sneak down to his sleeping place on the very first night, and kiss him.

It gradually becomes clear that McBurney (who’d taken a bribe of $300 to replace another man in the army just as soon as he’d got off the boat from Dublin) has found himself in an ideal situation - surrounded by well-mannered but bored girls. He determines to charm them into letting him stay rather than go back to the army, which he would prefer to avoid at all costs. 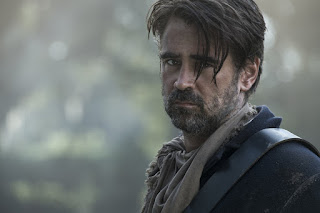 No-one does untrustworthy and disreputable quite like Colin Farrell, and over time, he’s got it down to a fine art. His Mc Burney is cunning, and starts to trifle with the affections of various young women. His mistake is to hedge his bets and play the field, a strategy that never ends well.

Coppola’s The Beguiled is handsomely filmed and presented - ghostly moss and mist hang heavily over the trees, the colours are tastefully subdued, the edges of the frame are slightly darkened, like old photographs. We are given the image of a decaying Confederacy clinging onto its outmoded values, its social niceties and notions of ‘Southern hospitality’.

The social strictures of the women require them to remain clean, pretty and genteel – to sit in the drawing room considering their embroidery while the sound of cannon fire booms on the not so distant battlefield and black smoke rises visibly beyond the trees. All they can do is read the bible, pray for their soldiers, hide their provisions from any passing thieves, and stay out of sight of any passing males in case they awaken unwelcome, violent lusts.

Despite its gorier aspects, the film was punctuated by laughter from the audience several times. There is dark comedy. Sometimes the film plays out like a counterpart to Ben Wheatley’s Free Fire -where several men jockey for position as the Alpha male to impress a single woman. Here, several females try to gain ascendance in the affections of one male. Both these scenarios offer tellingly satiric scenes, mortifyingly revealing the competitive antics of either gender, in the realm of sexual attraction.

Kidman, again plays one of those roles she is good at - a repressed, rather brittle woman, but her performance here is one which does not portray her character as a prig or a puritan, it is subtler and more rounded - a part of her is attracted to McBurney, but she also wants to get him to heal quickly so that she can be rid of his disruptive presence. She is a Christian woman trying to make right-headed choices in order to keep her charges safe.

McBurney’s betrayal and its fall-out destroys the previous equilibrium and sets in motion a sea-change in the demeanour of all the participants. As a revenge drama it is rather vague, coming across more as an act of desperate self-preservation and an attempt to regain control of a situation. The Beguiled instead offers the wickedly cathartic pleasure of seeing a cowardly and narcissistic man with few scruples punished for The Sins Of all scheming, controlling Men. Perhaps Coppola saw the story as a timely parable for today’s times?

Watch The Beguiled on Rakuten TV