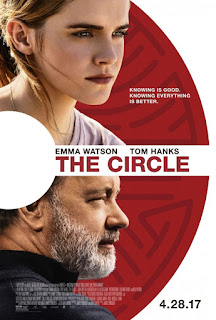 Steve Taylor-Bryant takes on the tech company as he watches the Netflix production of Dave Eggers' book, The Circle...

A while ago both Nate and myself disagreed. Disagreements amongst the writing team do not normally make headline news but Nate and I just don’t disagree, ever. Except this time. Our reviews of the book are here (mine) and here (Nate's) but did the film help us get on the same page or make the The Circle yet more divisive?

Making a book into a film is always a brave decision that has to be admired, no matter how good the outcome, and for an internet streaming company to take on an adaptation about an internet company that are a slight bit dodgy is also brave, so kudos to Netflix for not taking themselves too seriously. The film though was a strange one for me. My love of the book was always in the back of my mind and so I was wanting a screen version of what played out in my head whilst I read. And I sort of got that but didn’t, if that makes any sense. Considering it is so much easier to show visuals in the medium of film, the actual tech side of The Circle, Mae’s screens and social interactions that are at the heart of the piece, just didn’t seem to work for me as well as they did written on the page but, watching alongside someone who hadn’t read the book, I saw that this was maybe my failing as the film watching partner I had this evening (alright, it was my wife. It's always my wife as I have no life or friends) bought into the effects both visually and emotionally, so they obviously worked.

Turning to the casting and again I’m in torment. Tom Hanks as Bailey was spot on, exactly the performance that played out in my head, his face just before the line ‘We are truly fucked’ towards the end of the film was worth every dime he got paid for The Circle. Patton Oswalt as Stenton was okay, although not in it as much as I remember him being in the book, but less important than one of my issues coming up in a bit. Annie, Mae’s friend who globetrots and takes speed to keep up with everything in her high powered executive role was ably played by Karen Gillan, who I am beginning to see as someone other than Amy Pond, so well done to her. The family outside The Circle were by far the best bits of casting in the entire project and, sadly, we lost both of them in the year of the release. Glenne Headly as Bonnie and Bill Paxton as MS sufferer Vinnie were exactly right. The portrayal of an ill parent, the bond between man and wife, the lack of knowledge about fast growing tech that most parents have, all played out beautifully and I could have watched them all day.

Then we come to the main two in the book and strangely one of them has nothing to do in the entire film. Yep, they changed the ending completely, meaning an actor the calibre of John Boyega was completely wasted in the role of Ty as the last third of the story is missing or changed, so in essence Boyega stands around looking moody for a few minutes instead of being the star of the finale. The film's final third builds and builds like in the book… and then just ends. No Ty involvement, no fallout, no treachery or deceit. Just ended. Oh and producer's second choice for the role of Mae, Emma Watson, plays the character like she was fully aware that she was second choice.

Sounds bad doesn’t it? I've just read my words back and they don’t feel like they should be telling you to watch the film at all, but you should! It is still well made, it still shows the dangers of the internet, of social media in particular, it still has tension, talking points, world ideas that need to be discussed and planned for as many of them are already here. It shows the dangers that advancements are bringing but the great ideas that happen along the way, in the same way that the Nazi’s did some nice things before they too tried to overthrow the world. It is a well made look at a great book that is worth watching for Hanks' face at the end.

Its not the book though. Read the book.