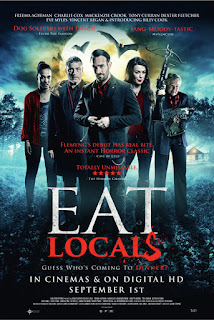 Star studded Horror/Comedy Eat Locals, will have its UK Premiere at this year’s FrightFest on 26th August. Watch the trailer...

In a quiet country farmhouse, Britain's vampires gather. They come together once every 50 years to discuss territories, disputes, threats and food stocks, and the approval of new members. On this night, a new face will be meeting them for the first time, and – if the vote is unanimous – could be the latest member to join their fanged ranks. This new face, however – local lad Sebastian Crockett – merely thinks he's on a promise with sexy cougar Vanessa.

Unluckily for all, Sebastian's not the only guest who'll be dropping in tonight. A detachment of Special Forces vampire killers led by Colonel Bingham has tracked the coven to this remote location, although they've bitten off far more than they can chew: they expected one vampire, not an entire coven. With barely a handful of men ill-equipped to take down such a bloodthirsty clan, Bingham must keep the vampires pinned down while the fractious coven must put their own differences aside if they're to escape before dawn.

For Sebastian, the soldiers and the coven, it may not only be the worst night of their lives. It may be their last.

From a script by BAFTA nominee Danny King, Eat Locals is an action-packed and riotously funny vampire thriller. “I've loved vampires since I was a kid. Some kids wanted to be racing drivers or astronauts. I wanted to be Christopher Lee,” says King. “I always wanted to write a vampire film, and there's only one thing better than one vampire, and that's eight vampires.”

Brought to eternal life by renowned actor Jason Flemyng (Lock, Stock and Two Smoking Barrels, Snatch, X-Men: First Class) in his directorial debut, Eat Locals is billed as Assault On Precinct 13 meets Interview With A Vampire in the story of a coven of bloodsuckers whose bark is almost as bad as their bite. The film boasts a whole host of acting talent including Charlie Cox (Stardust, Daredevil), Freema Agyeman (Dr. Who, Sense 8), Mackenzie Crook (Pirates Of The Caribbean, Game of Thrones), Tony Curran (Underworld: Evolution, League Of Extraordinary Gentlemen), Eve Myles (Torchwood), Ruth Jones (Gavin & Stacey, Stella), Annette Crosbie (One Foot In The Grave, Into The Woods) and Vincent Regan (300, Snow White & The Huntsman, Clash Of The Titans). Flemyng also reunites the cast of Guy Ritchie’s crime comedy Lock, Stock & Two Smoking Barrels, with Nick Moran and Dexter Fletcher both starring and Jason Statham directing the fight scenes.

EAT LOCALS will have its UK Premiere at FrightFest 2017 on 26th August, and will be in Selected Cinemas and PVOD from 1st September (iTunes & Sky Store, Google Play, Amazon Instant Video & Xbox Video Store & VOD/DVD from 30th October