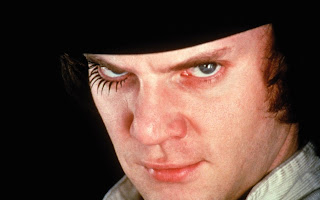 Our small band of Gunters here in the DreamCage universe are reviewing every film mentioned in Ernest Cline's Ready Player One. This week Steve Taylor-Bryant takes on A Clockwork Orange...


We have a problem with some of the films on our Project: RPO list and that problem is that not all the films are forgotten gems, or little known slices of pop culture. Some of them are behemoths, films that have been analysed and reviewed and studied for decades, what more do we have to offer? A Clockwork Orange is one such film. How do you review one of the most talked about films in cinema history? What’s the point in my reviewing something that better folk than I have opined on for a generation before I put words to paper? Well, the point is I have to, the film is on the list.

A Clockwork Orange is divisive, it was as a book and it most definitely is as a film. It is steeped in controversy, mainly around how the violent content was taken and used as an excuse by criminal elements in society for their crimes, and it even got pulled by Stanley Kubrick from UK cinemas until after his death. Some people see a political take on 1970’s broken society in the near future land of Alex and his droogs, some see it as nothing more than Stanley Kubrick producing a piece of art, some see the violence and rape scenes and are just full of anger, rightly so, but cannot see past that. Some see an experiment in pushing classification boundaries, although the BBFC didn’t request one scene be cut before release, and some see a bloody good film. I am sort of all of these people.

Having read the book by Anthony Burgess long before I ever saw the film, I knew roughly what to expect and Kubrick stayed pretty faithful to the text, with the exception of the ending. The cast and crew worked from copies of the book rather than a structured screenplay, allowing for the film to flow in a similar way to the words on the page. What is strikingly different though is the imagery. When you read a book as good as Burgess’ novel you build a world in your mind, the events happen in a way that your brain is comfortable to compute and your mind, whilst stretching your own comfort, never allows you to break. Your mind is not Stanley Kubrick’s mind though and his idea of imagery is vastly different to yours. This, to me at least, is the most artistic film Kubrick ever made. It truly is a thing of beauty when watched only as an exercise in filmmaking and with his use of humour, music and art within scenes you can see why the classification board had no problem granting the film permission to be seen. The true horror in A Clockwork Orange is not what actually occurs in front of your eyes but more what the visuals Kubrick uses do to your own imagination. You all think you saw the poor woman’s head get caved in by a massive ceramic penis but you didn’t. That isn’t there. Whilst grossly offensive the scene may be it is some of the cleverest filmmaking ever committed to screen.

Again, as a filmmaking exercise A Clockwork Orange should be a blueprint for all aspiring filmmakers to follow. Its casting is perfect, I’ll get to Malcolm McDowell in a moment, its soundtrack was unnerving, its cinematography transcended anything that had been on screen before 1972 when the film was released, its attention to detail and search for perfection mainly in Kubrick’s ability to listen to ideas from everyone on set regardless of their importance leads to a film that shows what a wholly inclusive team can produce. It is also a disgusting, violent, anti society, over the top examination of mankind and men in packs in particular. The esteemed Roger Ebert said “A Clockwork Orange is an ideological mess, a paranoid right-wing fantasy masquerading as an Orwellian warning.” and it’s hard to argue with Ebert, who saw more below the surface than most critics, but that’s another thing in the films favour, it self markets. You do not need to spend a billion dollars on trailers and worldwide marketing with a film like A Clockwork Orange. Those whose friends say how despicable the film is will go and see it for themselves and then tell their other friends of their horror, those who are a bit more anarchic will hear the reviews and go and see it because the actions of Alex appeal to them and yes there is people in society that are like that although I’m yet to be convinced of the direct link between media and violence. I have watched A Clockwork Orange a dozen times and never once carried out any of the acts portrayed in the movie. The shining light of A Clockwork Orange though is undoubtedly Malcolm McDowell.

Before Stanley Kubrick was attached to make the film someone in a studio somewhere had the bright idea to cast Mick Jagger as Alex and the rest of The Rolling Stones as his gang. I’m not sure 45 odd years later we’d still be talking about A Clockwork Orange if that had happened. Kubrick though came onboard and wanted Malcolm McDowell who he had seen recently in If. McDowell was subjected to some horrific days on the shoot including damaging an eye in the brainwashing scene as he tried for real to escape the straight jacket and the discomfort he was in. He took to the role of Alex with relish and was spellbinding. You can comment negatively all you want on the actions of Alex in the film but I’m yet to see a bad word about McDowell’s acting ability. The ease with which he portrayed Alex and how iconic his performance became is probably why Malcolm McDowell is always a version of Alex in everything. Normally such typecasting would be a shame but in this case I think it’s a great thing as I wouldn’t want to see McDowell play the good guy.

More horrific violence and scenes of sexual assault have been on our screens in the latter years than appear in A Clockwork Orange, and there was more violent films released before it. Not being born until 1975 I didn’t live through its controversial release so cannot tell you how I would have felt back then. What I can say is Hollywood produces more depravity yearly than you’ll ever find in A Clockwork Orange, so my only reasoning for its forty odd year divisiveness is that Kubrick made art and often art offends.