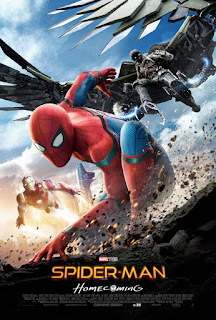 Well, here’s a film I wasn’t expecting to write a review for. I don’t mean to say that I had low expectations for the film I just didn’t feel like it to be honest. When I walked out of the cinema I thought, you know what? Let’s hit two birds with one stone and get some college work done and write again for the site.

Here is a quick synopsis provided by Google to give you a better idea of the plot without giving any spoilers:

Thrilled by his experience with the Avengers, young Peter Parker returns home to live with his Aunt May. Under the watchful eye of mentor Tony Stark, Parker starts to embrace his newfound identity as Spider-Man. He also tries to return to his normal daily routine -- distracted by thoughts of proving himself to be more than just a friendly neighbourhood superhero. Peter must soon put his powers to the test when the evil Vulture emerges to threaten everything that he holds dear.

This masterpiece directed by Jon Watts was something beyond belief as it delivered many things that the previous two Spider-Man films did not. An epic bad guy backstory, an actual kid to play Spider-Man and thrilling plot twists. The film (clearly) is set in New York present day as, uh, I’m not sure where else Spider-Man lives…

The film followed the story of Michael Keaton’s character of ‘The Vulture’ as well as the hero we all know as Peter Parker, played by Tom Holland. I have got to say though I respect Holland for taking up so a big role early in his career (except he was in, like, ten films before this one that aren’t Marvel related but still…), The plot also follows the villain of the film, incredibly enough, as we soon learn that his character is even more important than we thought, as he is a significant part of the big plot twist that left my jaw somewhere in the cinema. I won’t mention what it is as I wouldn’t dare to spoil it for anyone but the main plot is not Peter's uncle dying which is awesome. Not only does this help the film appeal to younger children by not featuring death, which many Marvel films seem to be drifting towards nowadays, but it also gives us a different story from this Spider-Man and also allows us to have two more films that aren’t his origin story, giving us more stories from this younger, more enjoyable web fanatic!

The film uses a range of camera techniques to keep the audience engaged such as a focused close up perspective of Peter's mask when he remembers the words that Tony Stark spoke to him (no I won’t say what those words were, so stop asking for spoilers!). We also see incredible tracking during epic scenes on planes, tracking scenes from vans and buildings that really put the audience in the front seat for a change. They personally made me feel like throwing up (not really but it was still awesome) because it was so real and thrilling to see something new and seeing more of the weakened state of Peter Parker whilst also setting morals for children that would aspire to such a respected hero. The editing was flawless and featured a variety of fast paced shots that kept the sequences intense whilst also slowing down when they needed to.

The film is a family film in my opinion, which is not to say that you have to watch it with your family but means that almost anyone could take some enjoyment away from the film, which in the end, is what Spider-Man was always meant to be. Of course, the film does work for the target audience, as the humour fits all audience, whilst also making the film appeal to people by seeming more realistic as, of course, at the end of the day Peter Parker is just a kid that was bitten by a spider, he has not had any special training that we are aware of.

I just want to finish this by saying that Michael Keaton’s character is really the most interesting of all as the fact that we are given a backstory of the villain for once (as opposed to Batman’s (in Batman vs Superman) and many others, in which we don’t get to see how characters such as Lex Luther originated) which we need in order to make us understand why they are doing what they are doing, if we haven’t read the comics. With the villain in Spider-Man though, it almost makes me want him to kill Spider-Man! He even justifies his motives before attempting to kill Spider-Man. The real cherry on the icing though is the after credits scene (the first one of course) that really made me leave the cinema respecting that villain. I will leave you with that note to watch the film and see for yourself what truly makes this film a masterpiece of quite possibly all Marvel films.