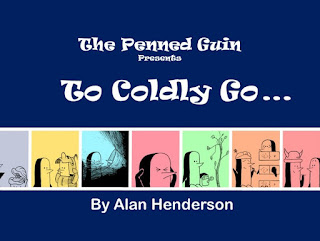 The Penned Guin returns in To Coldly Go, the latest collection of the award winning comic strip from Alan Henderson, currently crowdfunding on Kickstarter...

• any of several flightless, aquatic birds of the family Spheniscidae, of the Southern Hemisphere, having webbed feet and wings reduced to flippers.

“To Coldly Go...” is the all new book from the Guin... er... Pen of writer/artist Alan Henderson that pulls together over 170 of the daily comic strips, none of which have ever been in a printed edition before. With family friendly humour for all, the daily webcomic started in early 2013 to the website - pennedguins.tumblr.com and the new book is A5 landscape with 100 pages of black & white penguin funnies featuring puns, dad jokes and cringing humour - as our penguin crew have adventures in space; hold an election and visit the vet.

When you visit the Kickstarter page you'll see that it's already 100% funded (within the first 24 hours!) so why should you bother? What do you get for parting with your hard earned cash?

Well, it's the BEST way to pre-order the To Coldy Go book as a paperback (£6) or a pdf (£3). You can even own the ORIGINAL drawing of one of the comic strips along with it for just a tenner plus postage.

If you don't have it already (why not?) you can add the Penned Guin Treasury Edition, which is the book that collects the first five hundred strips that have previously been in the self published comics - Flying Lessons; Cold Feet; Out & About; and Melting Pot.

Or you could even commission your very own Penned Guin! What more reasons do you need? 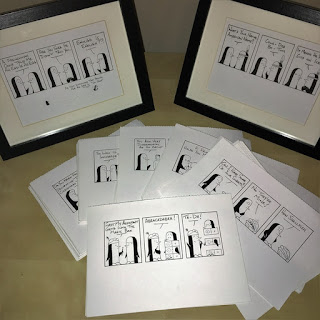 and pre-order the book on the Kickstarter here: