Steve Taylor-Bryant delves into the unknown as he breaks down twelve seasons of Supernatural into 12 Top 5 articles.  His top 5 from season two...


Bravo Supernatural creators and writers and directors and actors and everyone involved in season 2, that was some damn fine television. I really struggled putting this top five list together due to the sheer amount of great stand alone and story arc episodes. It normally takes longer for a show to pick up where it left off and build towards something better, but from the very first episode, In My Time of Dying, they hit the floor running and soon eclipsed a very strong debut series. The Winchester brothers went through the ringer more, there was a fair bit of Jeffrey Dean Morgan which is always appreciated by this viewer, Bobby Singer (Jim Beaver) plays a bigger part of the story and the lives of Sam (Jared Padelecki) and Dean (Jensen Acles), and of course the Impala is ever present. There's also the ongoing hunt for Azrazel (Fredric Lane) and his plan to bring all the people with special abilities together, and the new cast of hunters that help Sam and Dean as they're old friends of John's. The trio of Ellen (Samantha Ferris, daughter Jo (Alona Tal), and Ash (the incredible Chad Lindberg) all add some drama to proceedings for sure but also help give some background to us the viewers as to what life as a hunter is like from a different perspective to the Winchester boys. All in all I felt thoroughly satisfied at the end of season two, I felt I'd grown into the story and the events still gripped me despite me starting so many years later I know that Sam and Dean don't get permanently harmed. I also really enjoyed how well the finale, a stunning end in its own right, also sets up the story arc for season three. Anyway, enough waffling. On with the list! 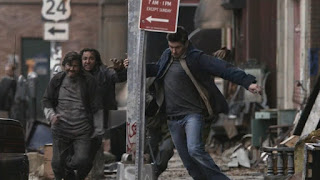 "I'm going to say this once, you make a move on him and you'll be dead before you hit the ground. Do I make myself clear? Is that understood?"

Another one of Sam's visions in which Dean kills a man by name of Duane Tanner sends the Winchesters to Rivergrove, a near ghost town facing mass demonic possession. Sam and Dean begin to believe that the demons are trying to destroy the town from the inside out when the remaining town-folk try to kill them. 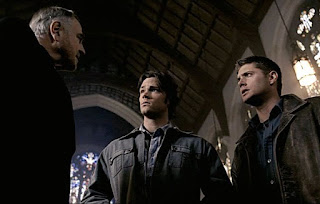 "Well, I think I learned a valuable lesson; Always take down your Christmas decorations after New Year's or you might get filleted by hooker from God"

In Providence, Rhode Island, the local Gloria kills a man claiming that an angel in a beautiful white night had chosen her for redemption and asked her to stab the sinner to accomplish God's will. Dean and Sam investigate the case and they discover that other people had been visited by the angel and committed murders. Further, the angel has appeared after the death of Father Gregory, who was murdered on the steps of his church two months ago. When Sam is visited by the angel and asked to kill a man, the skeptical and atheist Dean confronts the faith of Sam telling that men cannot be angels and the light is an angry spirit indeed. 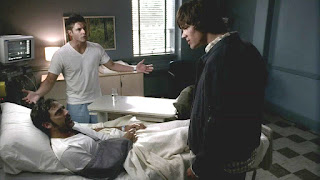 In the aftermath of the car crash, the surviving Winchesters go to the hospital, where one is stalked by a Reaper while another must consider sacrificing himself to save the others. 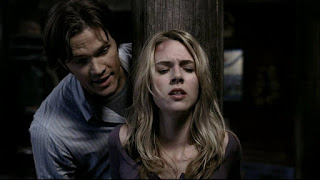 "You checked in two days ago under the name Richard Sambora. I think the scariest part of this whole thing is the fact you're a Bon Jovi fan"

After Sam goes missing for over a week, Dean finally receives a phone call from his brother. Dean finds Sam in a hotel room, covered in blood and suffering from the effects of a week long memory blackout. Upon investigation, the brothers find a video-tape of Sam killing another hunter in cold blood, which leads Sam to believe his dark side is taking over. When the dark side finally emerges Sam attacks Dean and continues on his hunter killing spree with his next targets being family friends Jo Harvelle and Bobby Singer. 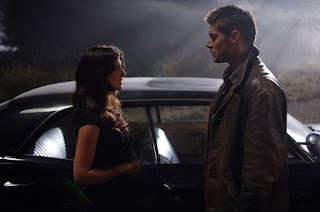 "You know, I usually like to be warned before I'm violated by Demon tongue"

Sam and Dean try to save the life of architect Evan Hudson who sold his soul to a demon so that his wife could live a long and healthy life free of cancer. While Sam protects Evan from hell hounds, Dean is tempted by the demon, who tries to convince him to trade his soul for his father's life, who she claims did the same to save Dean and is now suffering in hell for it.