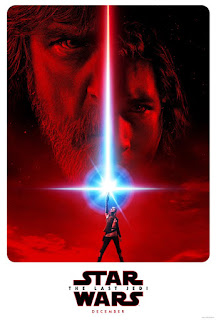 A long time ago in a galaxy far far away (ok, a couple of months ago, somewhere in England) the trailer for Star Wars: The Last Jedi was unveiled. Kraig Taylor-Bryant looks at what it could mean for the film ahead...

Well I needed this, OK? I know I’ve been lazy recently but I feel like it only makes sense to write an article on my hopes for Star Wars: The Last Jedi as I have done for Rogue One and The Force Awakens. Here's the trailer in case you have forgotten it.


To start with there was that interesting shot in the trailer of the stars (or what we think are stars) which then transitions into a shot of a puddle which Rey is leaning her hand on and struggling to breathe. There are so many theories for what could be going on here, some say that she is being tortured, some say that she is undergoing some trial. Me? I think that she has some kind of trial to retrieve an item from underwater and she has quite possibly failed, as we don’t see an object in the shot. Of course my theory about a backstory for Baze and Chirut in Rogue One was completely wrong. But bear with me on this one. Luke had a trial to face something in a cave, his fear was confronting Vader, as we saw in the scene at the cave and potentially becoming Vader. But what if Rey’s fear is the water? She lived on a desert planet for a lot of her life so it would make sense.

Back to the trailer itself, we then see a view of what could potentially be Rey’s visions. Although this is quite unlikely as, in The Force Awakens trailer, we had a voice over of Luke from Return of the Jedi which was never actually featured in the film. Anyway, next we see a room in which (supposedly) Leia is analysing some plans of sorts (hopefully not for a Starkiller Base 2 aka Death Star 4). Of course it could be any random rebel, although this does seem doubtful as there would no point in showing some random rebel. Although it is a teaser, so who knows? We then see Rey mention ‘the darkness’ and Kylo Ren’s mask shattered. It seems as though there is glass around it possibly. I believe that this is Kylo finding out that Vader turned to the light side and possibly feeling like Snoke lied to him about the dark side being stronger. This would make sense as I think the only point in having the mask was for the purpose of worshipping Vader as he was/ is the ‘master of the knights of Ren’ who worshipped Vader. We also see Rey possibly meditating whilst a wave of water is continuously hitting the shore. This could also back up my theory that Rey does not like water as this could be her trying to calm herself when confronted with the threat of drowning. I personally hope that Rey does not end up being afraid of water as this would be too similar to Anakin as he was afraid of sand and we have seen too many supposed ‘chosen ones’ in the story that have a fear of some kind (Luke’s being losing his friends/becoming Vader). 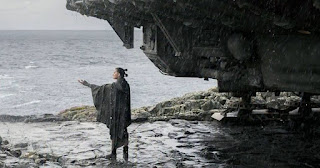 Ok, I’m rambling again, lets get back to the trailer, we also see Rey clearly training with a lightsaber, I just hope half the film isn’t just Rey training (or some kind of Rocky training montage of her training or something!). There’s not much else to comment on that besides the ridiculous theory that Yoda is in this scene. Some have noticed what I assumed to just be a rock as being Vader because it is small. To be honest, unless this was some hallucination I really don’t see how that would work as he clearly died and became a Force ghost.

We also see Poe running with BB8. I'm so glad he is still in the film as, in the original version, Poe died in Force Awakens and the film would feel quite flat with two main characters dead. Not much to comment on besides the fact that it is a possibility that his ship was sabotaged when it exploded. Not quite sure what he could do about that, if that kills him though then it will be quite annoying. And there’s also Finn in some kind of stabilisation pod, bit too ‘Treky’ in my opinion but oh well…. It was confirmed by John Boyega (Finn) that he will get better to actually do something in the Last Jedi which is good news. I personally hope that he also becomes a Jedi as the whole ‘two Jedi left’ thing is getting a bit annoying. It probably won't happen though. I believe that Poe and Finn are going to be on some kind of adventure together in this film as well.

There are also the strange looking speeders on some kind of whitish planet. No idea what those speeders are, they look a bit weird to be honest. Got some kind of red trail behind them which I don’t get but we’ll have to see how that pans out. I have also heard that the new imperial walkers are a lot stronger that the old AT-AT that we all know and love. These will be strong enough to not be knocked over by a simple tow cable which will make the film very interesting to see how the film plays out. We also get a glimpse of a potential space battle, perhaps Poe’s ship was sabotaged because the First Order don’t want the resistance's best assisting them in the battle. The space battle does look quite good though, seems to remind me of the Rogue One space battle which was really awesome so fingers crossed for a thrilling dogfight.

Back to the trailer and we see Rey running, which doesn’t really tell us much. I guess we could ask what she is running from, or perhaps running too? Actually that is quite interesting. Perhaps Luke is in trouble and needs help or Rey has to run because Ren has found Luke and Luke is protecting Rey. Could still be training but, if it is, I am going to go insane. We also see Ren for a small period of time, his scar has gotten smaller or moved or something I hear. My response? The Force, that’s how. Anyway he does look pretty awesome and it seems that he kept his lightsaber but I'm not complaining, it is unique and intriguing. 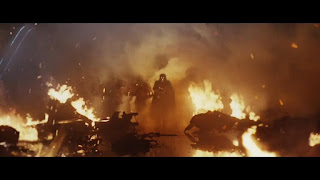 Then there's Phasma walking through some fire remnants of a battle. Some argue that this is simply the battle on the planet that Luke is hiding on (can't remember the name, it was something hard to pronounce, send me the name of the planet on Twitter please if you do). Of course this would be interesting if they were both there as Luke may have some kind of vendetta against Phasma which would be amazing.

The final scene I want to talk about is Luke saying ‘it's time for the Jedi to end.’ Of course, we all know that that is the most significant line of dialogue throughout the entire trailer, although some may argue that the mentioning of ‘the balance’ by Rey is way more intriguing but most of us would think otherwise. Of course there are theories that Luke will become some kind of grey Jedi or that Rey will become some kind of grey Jedi but the fact that Luke says that it's ‘time for the Jedi to end’ shows he has given up in a sense and I’m pretty sure that a grey Jedi still fits into the ‘Jedi’ category (that is to say if this is even a thing). The bigger question is what made him say this? Did he say this not long after he met Rey or is it later in the film? Obviously, if it's said early on in the film, then we can expect him to have some kind of change of heart eventually, when Ren potentially finds where Luke is hiding and Luke needs to fight to protect Rey or, more likely, even earlier as we do see her training and Luke’s words of wisdom form the beginning of the trailer. But, if it's later on, perhaps they really will end, and this is Disney saying that enough has been said regarding the Jedi. Considering that Rey can already fly the Falcon, perhaps she would give up too and become the next Han Solo, although this doesn’t seem likely. A more likely scenario would be that some event causes Rey to leave anyway and attempt to fight, leading to some dramatic entrance by Luke when he decides that he needs to fight because Leia and Rey need him.

While we’re on the topic of Leia, I do hope that they give her a proper send off as a character such as as some peaceful death or a small scene of a CGI Leia leaving the resistance and saying goodbye as she could have given up. Some may not call this a proper send off but it would give the audience a sense of closure and I think that Carrie would have wanted the saga to continue in her name. Perhaps they could have the character die and then repeatedly mention her as some sort of martyr to push them forward towards victory, and have Poe as the resistance’s commanding officer as it is shown in the comics that he is clearly fit to be a leader.

I have high hopes for this film and I really hope that it's not just a copy of Empire Strikes Back. I also hope that we get some depth into the characters that we were introduced to in the previous film. Time will tell.