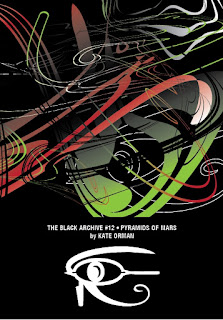 Your evil is my good. I am Sutekh the Destroyer. Where I tread I leave nothing but dust and darkness. I find that good.’

The Doctor Who story Pyramids of Mars (1975) is the inheritor of not only the colourful and complex mythology of Ancient Egypt, but a long tradition of Gothic fiction which emerged during the grip of ‘Egyptomania’ on the Victorian imagination. The alluring beauty and spectacle of Ancient Egypt, the late 19th-century flowering of occultism, guilt and anxiety over the Empire and the British rule of Egypt, and the ancient emphasis on the afterlife — including the elaborate preservation of the corpse in the form of the mummy — combined to create stories of the ‘reverse colonisation’ of Britain and British bodies, minds, and souls.

Rightly regarded as a high point of the vision of Doctor Who created by producer Philip Hinchcliffe and script editor Robert Holmes, the story pits the Doctor’s science against a god who’s really an alien, served by mummies who are really robots, in a struggle for the future of Earth against one of the series’ most powerful and frightening adversaries, the enemy of all life: Sutekh the Destroyer.

Author Kate Orman is an Australian writer, critic and editor, best known for her numerous highly regarded Doctor Who novels, many co-written with her husband, Jon Blum. She continues to publish original science fiction and fantasy and recently edited the Faction Paradox anthology Liberating Earth for Obverse Books. Kate has been hooked on Ancient Egypt since she was a young child, when she first encountered its fascinating hieroglyphic writing and numberless gods. Her blog can be found at kateorman.wordpress.com.

The Black Archive is a series of book-length looks at single Doctor Who stories from 1963 to the present day.

The Archive publishes six titles each year, in simultaneous digital and print editions. Each title is a twenty to forty thousand word study of a single televised Doctor Who story, drawing on all eras of the series’ history.

Series editor Philip Purser-Hallard explains the premise of the series as follows:

‘Doctor Who is endlessly fascinating, a powerful storytelling engine about which many millions of words have been written over the years. There are certain stories, though, from all eras of the programme’s history, which are exceptionally deep and rewarding – whether because of their unusually powerful writing, rich symbolism or complex themes. Stories like The Massacre, Kinda, Ghost Light, Midnight or Vincent and the Doctor demand to be explored at greater length and in more depth than a website review or entry in an episode guide.

‘With this series of critical monographs, these Doctor Who stories can receive the detailed treatment that they so eminently deserve. Our primary emphasis is on the stories as stories, rather than the behind-the-scenes history which has been covered in admirable depth elsewhere. While we aim to make an authoritative and significant contribution to the overall critical conversation about Doctor Who, we intend each of these books to be entertaining as well as of academic interest.’